Even as I write this, I can see the humor of my heartbreak; I know that someday I will laugh at the situation. And let me warn you that logic does not work with an angry 19-year-old.
"I don't even believe you're my parents anymore!" my 19-year-old son yelled as he raced down the stairs.
This was the second time he had walked away from the conversation, and the first time he slammed a trash bag against the door frame until it burst.
You might wonder what caused this outburst.
I told him that we wouldn't pay for his apartment while he attended college unless he passed his classes.
I'll just wait a minute while you re-read that last sentence. Let it sink in.
As parents, we were insisting that this boy, who went to college last year with scholarships in hand because of his high test scores, attend class and pass the classes, if he wanted us to pay his rent.
Many teenagers or young adults might be happy if their parents paid for their college. Others might be thrilled if parents paid their rent, but apparently we went too far in agreeing to pay for both if he received good grades.
If you are trying to understand this logically, give up. 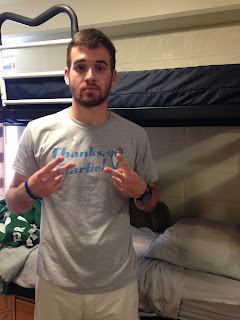 Last fall, my youngest son left for a 4-year university. A perfect storm of illness, wisdom teeth infection, a girlfriend at home, and a room full of four guys convinced him that college wasn't for him. He only passed one of four classes he took.
He moved home in January and attended a local community college. Again, only passing one of four classes. In May, before we knew he hadn't passed the classes, we let him move in with a friend. The two of them started a business, which blew up, along with the friendship in July. We never liked the roommate, so were happy to have him move home. He had talked about getting a house with three other guys, one of whom went to high school with him.
This past Saturday, we scheduled my son's classes for the fall. He has decided to take a two-year welding program. That's fine, but we don't really see him sticking with a trade job. He has never been a hands-on kind of guy, the kind who likes to get dirty or even play with Legos.
While scheduling classes, I asked him to pull up his class from this summer, and he hadn't passed it, just by a small amount, but still.
The next day, I asked my son to join me for breakfast. He didn't have time. On Monday, I again suggested we go somewhere to talk. No time.
On Tuesday, I saw him in the kitchen and attempted to bring up a conversation about the possibilities for him this fall. He could return to the 4-year university and live in an apartment with his brother while taking a few classes to explore what he wants to do.
His eyes went blank, as if he'd pulled down shades, like a character from a cartoon.
"Why do you do that?" I asked. "You aren't even listening to anything I say."
"Because you always second guess me," he said.
"When have I done that?" I asked.
"Now," he said.
And that's it. Just this one time that I thought he might not want to be a welder and knowing that he hadn't succeeded in the class he took this summer.
On Thursday, he decided to make peace and let me know that he and his friends had found a 4-bedroom house to rent.
That's when I released the bombshell that we wouldn't pay for an apartment until he passed his classes.
"So I have to live here until December?" he asked.
"Yes," I responded.
He couldn't possibly do that. Living here was impossible! He didn't even want to go to school at all.
The situation didn't improve, and when he stormed out the door to go to work, I was left wondering if he would quit school and simply move out.
It's not what I want. I want to help him succeed at college, and I think I'm doing everything that I can toward that.
He came home last night after I was in bed. No one has talked about what will happen, what his future holds.
Right now, we're all kind of waiting to see what happens.
I'm sure I broke my parents' hearts when I was his age. I was rude and entitled. I traveled to faraway cities to live a couple of times.
To adults, it seems silly that he wouldn't take the offer of college and get a degree to be whatever he wants to be.
Last night, I was talking to a student, probably in his mid 20s, who told me he is having trouble getting to class because he has to take care of his 1-year-old daughter, and the girl's mother wants nothing to do with her. We talked about how difficult it is to go to school while raising a family and working.
He told me his 17-year-old sister thought she didn't want to go to college, and he was trying to convince her to do it now.
"You know," he said, "there's some people who can't learn from watching other people. They have to make those mistakes themselves before they learn."
And that rang true for me.
In the midst of my broken heart, in the midst of standing fast to the rules we've set, in the midst of loving my son in spite of his misguided path as he grows up, I know I have to let him make his own way and hope that I'm around when he's ready to ask for guidance.
at July 31, 2015

I'm 78 years old, and when people try to tell me what I ought to do for my own good (yes, that includes my children), I can just feel my heels dig in, my fists clench and my teeth grind. They may be right, but there's something about "oughta do's" that makes me resist. I guess at heart I'm still 18. So I relate to your and your son's situation. We do have to learn it on our own. One day I may figure out what I want to be when I grow up.

Lee, Thanks for reminding me that individuals are individuals. Guess I can't engineer his life even if I know it would be easier for him.

I can relate to this stressful situation between your son and you, and college and rent, etc. Would hiring a tutor help him? One thing I've learned from being a parent and also other life situations is that no one ever follows anyone else's wise advice. And I think my advice is brilliant :)

If it makes you feel any better, I totally agree with you. I hope he gets it one day. But it may be a while. I've been through this with all of my children in one way or another. My daughter is just now getting her act together and has returned to college, something was never able to finish, to be a teacher. She is married, with a son and it has taken this long for her to grow up.

I feel for your situation and have lived through parts of it as well as a mon of 2 married adults with kids. Like Lee above, I think we all resist others telling us what we "should" do. Even in my 60's when certain people tell me I SHOULD Do something, I tend to do the opposite or give them the silent treatment for a while (immature)? you bet).

Thanks to everyone. Although the problem is not easily fixed, it always helps to know that I'm not alone.