Every Tuesday, Diane at Bibliophile by the Sea posts the first paragraph of her current read. Anyone can join in. Go to Diane's website for the image and share the first paragraph of the current book you are reading.
I'm all in with the Paris in July meme this month, I'm starting on my third book set in France -- The Red Notebook by Antoine Laurain. Because this is a book by a French author translated into English, I don't expect it to end well. Happy endings don't often go with French books or movies, but so far I'm sucked in to the story of Laure, a woman who has her purse stolen and ends up in a coma, and a 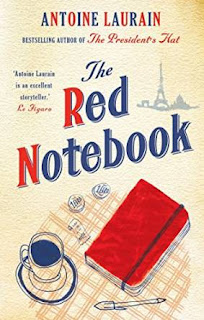 bookseller named Laurent who finds the purse and belongings on the street and begins to trace the story of the unknown woman. Here's the intro:


The taxi had dropper her at the corner of the boulevard. She was barely fifty metres from home. The road was lit by streetlamps which gave the buildings an orange glow, but even so she was anxious, as she always was when she returned late at night. She looked behind her but she saw nobody. Light from the hotel opposite flooded the pavement between the two potted trees flanking its entrance. She stopped outside her door, unzipping her bag to retrieve her keys and security fob, and then everything happened very quickly.

A hand grabbed her bag strap, a hand that had come out of nowhere, belonging to a dark-haired man wearing a leather jacket. It took only a second for fear to travel through her veins all the way to her heart where it burst into an icy rain.


I'm looking forward to seeing what everyone else is reading.
at July 21, 2015

I have been eyeing this one...and now I definitely want to read more. Thanks for sharing...and for visiting my blog.

Oh goodness, that is intense! I hope it's someone she knows and she's not in danger!

I've seen a couple of reviews of this for Paris in July. It sounds good - enjoy!

I'd keep reading, but I'm wondering - why do the French books and movies not have a happy ending? Inquiring minds want to know. LOL

I would keep reading. I might have to go get this book because I want to know what happens. Girl Who Reads

Oh wow, that makes me anxious for more. Hope u like it.