Every Tuesday, Diane at Bibliophile by the Sea posts the first paragraph of her current read. Anyone can join in. Go to Diane's website for the image and share the first paragraph of the current book you are reading.
I have a book I'm saving for my trip to France, which is only 10 days away! I had to order Jill Mansell's The Unpredictable Consequences of Love from the UK because it is still not available in the U.S. Mansell is a perfect vacation read, a British chic lit novel. I plan to open it on the plane. 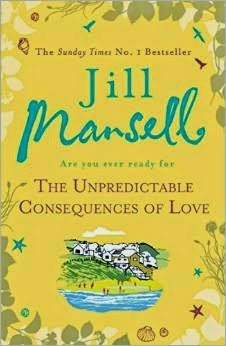 
In the high-ceilinged drawing room of the Mariscombe House Hotel, Sophie Wells was putting the finishing touches to the setting for the photo shoot.
The original plan, to photograph the Ropers outside and en famille in Marks and Spenceresque summer meadow, had been scuppered by the abysmal weather. The rain had been hammering down all morning and there was no way of postponing the event, as two members of the family were flying back to Australia tomorrow.

But Emma Roper knew exactly what she wanted. On the phone earlier she'd said, "OK, if we can't be outside, we'll have one of those all-white shoots instead. You know, all modern and cool. And we'll all wear white too. It'll be like one of those Boden ads." Delighted with herself and her artistic vision, she'd announced, "So that's sorted. We'll see you at the hotel at three. It'll be great!"

Sounds like Sophie has a job that throws her together with insufferable, posh people. I look forward to digging into it.
I look forward to finding other good book ideas from everyone on Tuesday Intros.
at March 03, 2015

I just love that we can order books from around the world before they are released in our own country. :-)

I have yet to read a book by Jill Mansell, but this one does sound like it will be good!

I haven't read much by this author but always see very good reviews for her books. Thanks for visiting my blog too. Happy reading :)

Haven't read this author for a very long while. Should be going back to her. Thanks for the review.

I have never read Jill Mansell before. But you have made me want to try some of her books. Thanks for the intro. Have a marvelous vacation. I will be on vacation too, only to Phoenix though. Not nearly as exciting as France. Bon Voyage.

I've never read Jill Mansell before, though I've been tempted enough that I have a couple of her books downloaded to my reader. I just never seem to get to them!

I used to read Jill's books , could even give this one a try. Have a fabulous time in France :-)

I found another French meme you may be interested in. I linked to it today.

Hello, and thanks for choosing my book! In fact it has just been published in the US as The Unexpected Consequences of Love - don't know why Sourcebooks changed the title slightly! Really hope you enjoy reading it though, and have a great holiday!
Best
Jill Mansell