Every Tuesday, Diane at Bibliophile by the Sea posts the first paragraph of her current read. Anyone can join in. Go to Diane's website for the image and share the first paragraph of the current book you are reading.
I found this latest book by Ellen Meister at the library. I'd previously read and enjoyed The Other Life and Farewell Dorothy Parker by Meister. Of course, who doesn't love the bon mots of Dorothy 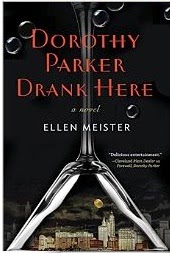 Parker. In her previous Parker novel, and this one, the idea is that Parker haunts the Algonquin Hotel where she and other authors hung out. In this book,the quipping Parker is mixed with a likeable television show assistant producer who's about to lose her job and a washed-up author who is dying of an operable brain tumor because he feels guilty about cheating on his long-ago wife. I'm really enjoying the book.
Here's the intro:


1967
Death was like a bowl of soup.
At least that's how it felt to Dorothy Parker. One minute she was aware of a terrible pain radiating from the middle of her chest, and the next she was floating in a warm, brothy bath, where everything around her hovered at the same temperature as her body. She couldn't tell where she began and the world left off.

I look forward to seeing what everyone else is reading.
at March 10, 2015

I'm not familiar with this book, but I like the premise and the opening. I'd keep reading!

That's an interesting description of death. I'd like to find out how she got there. I'd keep reading. Have a nice week.

Ooh, what an eerie feeling that must be! Love that opener. Thanks for sharing...and for visiting my blog.

What an interesting idea. Sounds like a fun read.

Glad you are enjoying the book. I liked the opening.

This sounds irresistible, and I love the cover!

So happy you joined us again this week. Thanks

I'm reading The Elegance of the Hedgehog. It's been written by a French woman and is about an apartment building in Paris with an interesting guardienne. Lots of philosophy though, not usually my cup of tea.