Earl works evenings, so most evenings I'm home alone or chaperoning Tucker and his girlfriend.
On Earl's two evenings off a week, we try to find something fun to do. Tuesday night, we walked down to the library and borrowed a couple of movies then went to a local coffee shop. We sat at tables along the sidewalk and enjoyed the beautiful September night. 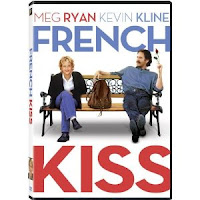 When we had walked home, we watched one of the movies. Made in 1995, French Kiss with Meg Ryan and Kevin Kline is a great romantic comedy for anyone who loves France, like I do.
Earl had never seen it before, and I only fell asleep for a small part of the movie. Kevin Kline plays a Frenchman, Luc, who is a thief. I wondered why they had chosen him to play a Frenchman and when I searched it online, I found that the role was originally written for Gerard Depardieu. I like Depardieu, but I can't imagine Meg Ryan falling for him.  Kline has since played other French-speaking parts. The plot is that Meg Ryan is petrified of flying so she doesn't go overseas with her fiance. He meets a French woman and falls in love. She gets up her nerve to fly over and win back the fiance, but meets Luc on the plane. He hides some contraband in her bag and they are thrown together.
Although I love France, I still prefer to watch American movies made in France. The problem is that comedies in France aren't generally  funny. Someone almost always dies. But the other movie we watched on Earl's night off was French, billed as a romantic comedy. We were prepared for bodies to start stacking up as the hilarity ensued. 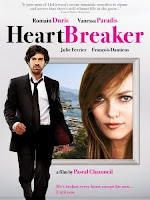 The movie was called Heartbreaker with Vanessa Paradis and Romain Duris, French actors. The premise is that Duris plays Alex who, with his sister and brother-in-law, runs an elaborate business to break up couples. The examples they gave were a brother who paid them to break up his sister and her lame boyfriend, and a father who hired them to keep his daughter from marrying someone boring.
The beginning was fun as Alex and his crew went to elaborate lengths to convince a woman that she deserved more than the man who preferred to stay by the pool and watch a wet t-shirt contest.
Of course, Alex meets his match when he is asked to stop the marriage of Juliette, an independent woman, to a British philanthropist. Alex takes the job because he needs the money, even though it goes against his principles. He usually only breaks up couples who are unhappy or a bad fit. Juliette puts up quite a fight, which makes Alex fall in love with her. I won't tell you how it ends, but surprisingly, no one dies, which makes it 'ilarious, as the French say.
Both movies were full of lovely French scenes.
at September 13, 2012

I watched Midnight in Paris and even though it was beautiful to see the scenery. I found Owen Wilson painful to watch! My sister agreed, she would have someone else for the part.

I'd have to say French Kiss is the best! I love Kevin Kline and Meg Ryan! one of my favourite parts is when she is on the train "lactose intolerance!"...

The third movie I will have to see if I can rent it or get it anywhere!
Enjoy your day!

So glad I read this post. I was debating watching Heartbreaker about a week ago - it's on Netflix instant streaming. I don't remember why but I passed. Now I know it's worth watching.
That evening with your husband sounds really nice. Like you are best friends with benefits.