Book Review -- In the Bag

I was going to save this book for First Paragraph Tuesday, but it's such a quick read that I'm afraid I'll be finished with it today. So I wanted to tell you about In the Bag by Kate Klise.
Truthfully, this has been on my shelf for awhile. The cover says "A tale of two suitcases, three cities, four people and one big mix-up." 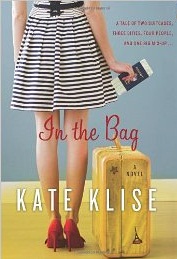 I thought it sounded cute. But it didn't compell me to choose it from among all the other books. Yesterday I did and I learned something about the book that would have made me start it much sooner -- it's set in Paris. Hellooooo. That definitely would have hooked me.
Here's the premise: a mother who's a famous chef in Chicago travels to Paris with her teenage daughter to avoid prom weekend at home, since the girl doesn't have a date.
A father, who organizes art exhibits, travels from St. Louis with his teenage son to Madrid. The father is working so he takes the son along to enjoy the atmosphere. They're all on the same plane from St. Louis to Paris and the teenagers accidentally end up with each other's bags.
The teenagers start emailing each other trying to return bags and end up in an online romance.
Each character gets to tell his/her tale. We see the mom and the dad worrying about their teenagers (something I'm familiar with). We see how clueless the parents are from the kids' perspective.
The kids come up with such a stupid plan to meet each other, that it seems genuine. No offense to any teenagers out there, but the more I get to know them, the more I realize many teenage ideas are ridiculous.
And, added to the fun, the dad had accidentally spilled wine on a woman on the plane. Guess who that is? And he can't stop thinking about her.
This is a fun read if you get a chance to pick it up.
I just wish there'd been a little more emphasis on the setting to get me and all the other Francophiles to pick it up.
at September 03, 2012

Sounds like a fun read indeed. Hope you had a nice weekend and the kids are doing well at school.