My mom called one night this week. "I just wanted to find out how Tucker was," she said.
Tucker, our remaining child at home with his two older siblings at college. He's 16 and frequently sullen, but sometimes buoyantly friendly. There's no predicting which one he'll be.
"He's fine," I said. "He got a 97 on his chemistry test."
He works out three days a week after school to get ready for swim season. He spends a lot of evenings fetching his girlfriend from her college dorm 15 minutes away and bringing her back to our house. She's probably here for dinner three or four nights a week.
"I saw that they'd broken up and didn't know who did the breaking up, but wanted to make sure he was okay," Mom said.
She's friends with Tucker on Facebook. I'm not. I never know his status in relationships or otherwise, unless he volunteers it. 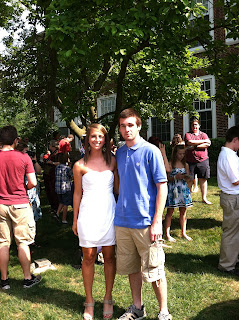 "Really?" I asked. "She was just here last night. She was going to take the bus back to school and we told Tucker to drive her."
After I talked to Mom for awhile, I called down the basement to Tucker. He spends a lot of time playing  Xbox or watching TV in his man cave.
"Who broke up with whom?" I asked.
"Don't worry about it, Mom," he said.
"But you're okay?" I called.
"Yeah," he said, with that tone that includes the word "Duh!" even though he didn't say it. "We're not dating but we're still together."
"Oh..." I had no idea what that meant.
But I do know that when I got home from running errands last night, she was here again. She's a sweet girl, but the bridge between a girl in college and a boy in high school is pretty great, even if they're only 15 minutes apart.
Still, maybe they've figured out how to take the sting out of break ups. On Facebook, they're not a couple any more. In real life, she was here three nights this week.
I can't figure it out, so I'll just make dinner for the both of them and stop trying to solve the puzzle.
at September 21, 2012

Hi Paulita, I know the feeling. I am not on my youngest son's facebook (he is 29) other members of my family are BUT NOT mum.. He said it was a bit funny having me on there LOL LOL ..

I'm on both my sons Facebook friend lists, I mean how else am I supposed to know what they're up to?

However, what they call stalking, I call keeping abreast x

I do not have children-but I am with you, I am clueless as to what that is supposed to mean. Good Luck.