We're trying a little experiment at my house and it seems to be working.
About a week ago, I started letting our older cat outside. He's been an indoor cat since he came home to us about six years ago. Tupi is the elegant tuxedo cat with the giant paws that have extra toes.
He's always been pretty laid back, but in the past year or so, he started peeing outside the litter box. At least that's what we thought when we would find cat pee. And how would we find the cat pee? The younger cat would go to the spot and scrape around it, like he was trying to cover it with cat litter.
We took Tupi to the vet again and again. He gave him shots of antibiotics for a urinary tract infection. We paid $50 per bag for special urinary tract health cat food. All to no avail.
Finally we started to see Tupi pee. He didn't squat down like he would in the litter box, instead, he stood straight up and his tail quivered as he peed.
I found an article at Cornell University that described this exact action and called it "spraying." Of course, Tupi has been fixed, but according to Cornell, about 10 percent of male cats that have been fixed can spray. Weren't we lucky to be among the 10 percent. Then I started to correlate the spraying with the times that Tupi did it. Mostly, it was in the morning when the outdoor cats were traipsing over to the neighbor's house for breakfast. She made a habit of feeding all the stray cats.
Some of the outdoor cats didn't seem to bother Tupi. He'd sit on the other side of the screen from a long-haired gray and white cat while they batted at each other. But one particular cat drove him crazy.
This cat was black and white, just like him. Maybe he felt like he was seeing himself enjoy freedom. 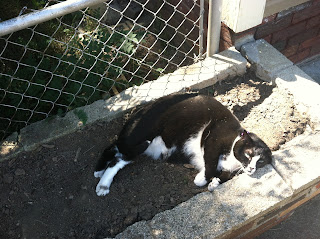 So when we had a little spare money, Earl and I went to Petco and bought Tupi and handsome purple collar with little white paw prints. We had a purple heart engraved with our phone number and address. We left the bell on his collar as a warning to any birds he might be chasing. We put the collar around Tupi's neck and we let him outside.
He was hesitant at first, afraid we'd scoop him up and plop him back in the house. After a while, he found a patch of dirt and rolled in it. He crouched on one side of the chain link fence and growled at the dogs next door.
He has seemed to adjust. Most of the time he spends lying in the yard, surveying his kingdom. One day I found him lying on the porch swing with his friend the white and gray cat lying in the chair next to him.
I haven't seen him spray and haven't smelled any evidence of it.
I guess he just wanted to get outside and protect the house from the other cats that prowled around.
Now, I just have to figure out how to explain to the younger cat that he doesn't get to go outside unless he starts acting up. Some parenting lesson, huh?
at September 27, 2012

Interesting, I knew that cats were very protected their territory but did not realize it would include spraying, I am not lecturing-but I hope that you are not next to a road-we lost a cat to a car and it broke my heart, I had never seen her on the road but one night there was a racoon in our driveaway and I think she fled to the street.

I had one of those 10% that could still spray too. Thankfully, he did not do it inside, but he did do it against the house on the deck if the neighbor cat would come to visit. Once they got to know each other, he quit doing it. Glad you figured out what was causing the behavior.

Esme, You're right that I would be devastated if something happened to Tupi, but I feel like allowing him to go outside is the only way to keep him.