It started when Sheila and I went to our regular place for coffee. A yellow paper stuck to the wall announced a pizza crawl.
We'd heard of pub crawls, but I'd never been on one. The pizza crawl was the same kind of thing but we would go from pizza place to pizza place then vote at the end for the one we liked best.
"That sounds like fun," I commented last week.
This week, we were back at the coffee shop with another friend who pointed out the pizza crawl. "Yeah, we were thinking about doing that," I said.
So when I got home, Sheila had sent a message to our group that said she and I were going to take part in the pizza crawl. 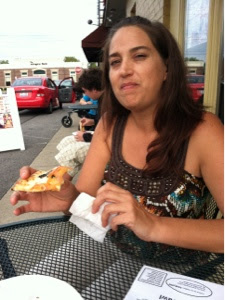 "Wait. I don't think I committed to that," I responded by email.
"I think you did," she replied.
So that how I ended up walking to our small downtown on Thursday evening.
I stopped by Sheila's house first where she blended up a couple of margaritas and put them in to-go cups, those cups people use to get iced coffee drinks, with lids and straws. I like to think of myself as a rule breaker, but I was pretty nervous about walking around with an alcoholic drink. We have open-container laws here, which means you can't walk the streets with an open drink. Sheila pointed out the drinks were closed cause they had lids.
I warned Tucker that he would need to come bail me out of jail if I got arrested. 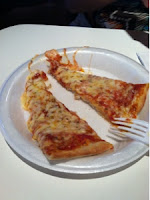 Our first stop was right around the corner. A thin crust white pizza, which meant no red sauce. We picked one that had tomato slices with dots of spinach. I liked the flavor of olive oil and that the pizza wasn't overwhelming.
At the very first place, Sheila and I agreed that if we tried to eat a whole slice of pizza each, we wouldn't make it very far. So we decided to buy one slice of pizza at each restaurant and split it in two. That way we could try more.
Each slice of pizza was $1. By the time we had finished, we had visited 6 pizza places and spent $3 each. Not bad. 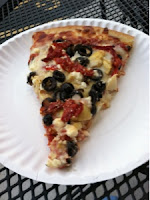 After the first nearby place, Sheila suggested we try some of the farther flung pizza places that we wouldn't usually visit, so we began hiking along the road and hit the two farthest ones.
One of them was in a bar. We walked in to head-banger music. Sheila called it 80s hair band music. She admitted that she used to hang out in this bar and do her homework when she was in high school because they were lax about checking IDs. She pointed out the bathrooms: "One was for using the bathroom and the other was for doing drugs."
After we got our slice of pizza, she texted her youngest, 14-year-old Thomas, and told him and his friends not to walk all the way to this bar for pizza. It didn't seem like a good idea for the unaccompanied teenagers to come to the bar. Of course, Sheila didn't have that rule for herself when she was a teenager.
The pizza in the bar was saucy and cheesy, but not too spicy. When we finished, that was our 4th shared piece of pizza, equivalent to two whole pieces. I was starting to get full. We decided to head to the farthest place in the opposite direction to try a piece of pizza another friend had recommended.
So we started walking. Throughout the evening, we walked 4. 6 miles, according to Gmaps pedometer. Walking in my Birkenstocks, after running 4.5 miles that morning and working 8 to 3, I felt the day wearing on me.
We sat down at the last place to a piece of pizza with artichoke hearts, black olives and dried tomatoes. The toppings were tasty. I ended up eating the toppings and leaving the end of the crust.
Finally, Sheila and I walked toward her house. We stopped at one last place and grabbed $1 slices of pizza to take home for our kids. I bought two very heavy meat lovers slices to take home to Tucker, covered with pepperoni, sausage, bacon and meatballs -- holy cow.
It was worth it though, cause he was happy, and I could finally put my feet up -- full of pizza and maragarita and enough exercise to not feel guilty about it.
Next time, I think I'll try a pub crawl.
at September 14, 2012

What a great story. I can relate to your semi-curious 'sounds like fun' attitude. I bet you never expected to be hiking from pizza place to pizza place in your birkenstocks. Love how your friend held you to it.
Your story reminded me of the time I was volunteering with a bunch of other moms for my sons highschool play. It was a weekend and we were getting ready for the show to open the following week. I don't think the kids were around. One of the moms went out for 'soda'. Except she brought back mai tais in soda cups with straws. It's absolutely taboo to drink on school property so I'm sure I didn't.

Hmmm. I think I would have been tempted to go ahead and drink the maitai. Might as well get in trouble with the rest of the moms.