Sometimes I get the best ideas, but I rarely follow through on them.
This morning as I was running in the dark, I came up with another one.
I run in the street because it's less likely to be uneven and trip me up like the sidewalk does, plus the asphalt is better for my knees and joints than the concrete.
I run against the traffic so I can see those few cars that might be headed my way in my small town at 5:30 in the morning. I consider it my responsibility to get out of the road if a car is coming and it doesn't see me or can't get over.
As I turned onto a street with very few streetlights, I realized cars might not see me since I don't wear any lights. I have reflectors on my water belt and my shoes and my hat, but if a car doesn't have its lights on, it might not see me.
If a car didn't have its lights on, I would hear it, I reassured myself.
Aha, but what if it's an electric car, you can't hear those, the annoying, worrying voice in my head responded.
That is a problem that people have been working on: how to make electric cars louder so the vision impaired, or runners in the dark, aren't surprised by them.
That's when I came up with the genius idea. The tires have to go around for the car to move.
When I was a kid, we had these great plastic straws that went on the tire spokes of our bikes and made the best t-t-t-t-t-t- noise as the wheels rolled down the street. That's just what we need on electric cars.
Here's a photo from Yellow Dog Racing to illustrate the way the tires look. 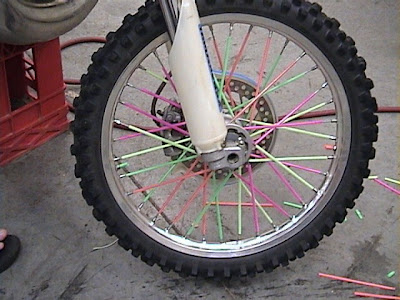 I think these kinds of colorful accoutrements will spice up the electric car images too.
at September 06, 2012

LOL you are too funny!