Every woman loves a compliment.
I'm lucky that I'm married to a man who continues to compliment me, but sometimes I'm suspicious that his compliments are colored by the fact that he loves me.
My husband would also tell you that I'm fairly oblivious to men who flirt. That's what he told me when I came home from the library a few weeks ago and told him the librarian had erased a missing book on CD from my library card. 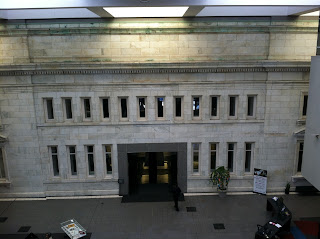 I couldn't find the book on CD anywhere in the car, so I asked the librarian to see if it had been returned and not checked in. He looked on the shelves and told me that, although it wasn't there, he'd take it off my card.
"Just return it if you find it," he said.
When I went home, I told Earl about the interaction and commented that the librarian was very kind.
"Uh-huh," Earl said.
"What?" I asked.
"Nothing," he said.
The next week, Earl cleaned the car and found the missing book on CD. I returned it and felt kind of sheepish. The librarian who had helped me wasn't around so I didn't have to confess my mistake. But when I went to the library again this week, he was there.
"Oh, hello," he said as he walked past me while I was browsing the shelves.
I might not have interacted with him again, except the computer popped up a warning that I needed to pay my fines before I could check out.
I moved to the main desk with my stack of books and started to sign in on a different computer where I could pay my fines. The librarian stood behind the desk.
"You know," I said, "I found that book on CD that you took off my card."
"That always happens," he said.
"I was glad you weren't here when I returned it. I would've been embarassed," I said. "I peeked to make sure you weren't here before I came in with it."
"Yeah, cause I would've held it up and told everyone," he said.
He turned to a computer behind the desk and said he could help me with my fines and checking out. He remembered my name and already had my account up on his computer.
I stepped over to the other part of the desk.
"I remembered your name from last time," he said.
"Oh." I was surprised.
"I remember because I wanted to tell you that you're one of the most beautiful women I've seen."
He turned to run my credit card through the machine to pay off my fees.
"Is there a 'vote-for-your-favorite-librarian contest' going on?" I teased, looking around.
"No, really. I mean it. I'm sure you hear that all the time."
Well, surprisingly, other than my husband, people don't tell me I'm beautiful. And although I didn't say that, it did make me realize that I'm not wearing a wedding ring, not since my ring finger started breaking out this summer.
That would have been a perfect chance for me to mention my husband to the librarian. But, I have a book coming out soon and I would love to have a librarian on my side when it comes time to recommend buying copies of the book.
So instead, I said, "Ahh, I'm too old to hear that any more."
"Well, I'll remind you every time you come in because you should hear it," he said.
And I left the library with my books, feeling a little awkward, but my spirits slightly buoyed.
It's not everyday a woman gets told she's beautiful. But maybe we all should.

You're going to have to get used to taking compliments, Paulita, if you have a book coming out. The librarian will be saying what beautiful writing from such a beautiful person... Although I'm sure there'll be lots more compliments coming from other readers too x

"Flattery and Flirting" reminded me of one time many years ago when I asked a married woman for a date. It was in a gymnasium, and she wasn't wearing a wedding ring either. She politely declined, but indicated she would tell her husband that a "nice-looking guy had asked her out." I remember hoping that her husband wasn't a linebacker for OSU or the Cleveland Browns.

That got me all choked up. What a great story ... I for one am looking forward to more flirtatious Tales of Accidental Flirtations at the Library.
But seriously, what a lovely thing to happen.
Also can't wait for your book!

What a nice story - You are certainly worthy of the beautiful woman compliment.

PS Did this happen at your library or mine ? I want to check this librarian out - It could be my neighbor. Rest assured he's never said that to me.

Oh I forgot.... I would have freaked out that someone with access to my information would remember my name.
I know I know - I have this radar that may send false positives.