I love featuring a book on my blog and hearing from the author. That's what happened a few weeks ago when I included The Reluctant Tuscan on my First Paragraph, Teaser Tuesday blog. The author, Phil Doran, sent me an email. I had commented that I liked the cover of The Reluctant Tuscan because it reminded me of A Year in Provence and he confirmed that the same artist had created both covers. He also said that John Travolta and Kelly Preston optioned the movie rights to his book, so a movie of The Reluctant Tuscan may be on its way. It's always fun to get the inside scoop from an author. 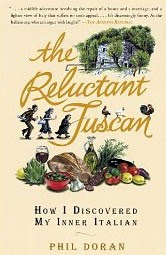 I finished reading The Reluctant Tuscan and truly enjoyed it. My husband is reading it now. Of course, we have a not-so-secret dream of moving to France once the kids are all out of the house, so we consider the book more of a how-to guide than simply a memoir from someone who made the leap.
The book is written with a lot of humor and insight into the upheaval that comes with embracing a new culture. Doran is a Hollywood writer hesitant to admit that younger writers are getting more bites than he is. Doran's wife sees Hollywood tearing him apart and buys a decrepit house in Tuscany, hoping to convince him to move there and begin enjoying life.
Sometimes I get frustrated at the scenarios that allow people to live their lives in other continents, not worried about jobs and health insurance and raising children, but Doran has no qualms about admitting the financial limitations and his attempts to sell his writing while in Italy. Even while learning that life in Italy is more about living than making a living, Doran nurses some hopes that he can make it big as a writer in Hollywood. He gives some interesting insights into that world as well.
The book made me laugh a lot. The couple rented a house where the heat didn't work so they wore layers of clothing. Then when the heat was turned on, you guessed it, a heat wave came in and they walked around sweating. Things like that are harder to get fixed when dealing with a foreign language and foreign culture.
As a straightforward American, I find it hard to believe that so much finagling goes on while trying to get roads built and houses remodeled. At one point, while trying to hide the fact that their old ruin of a house might be covering a more historic shell built by the Etruscans, they invoke the Sopranos as New York relatives to intimidate the builder. I can't imagine being that ballsy.
Mostly though, I enjoyed getting to feel the culture that surrounded Doran as he slowly unwound from the importance of being a success to the importance of enjoying life.
at June 29, 2012

Where in Tuscany was the story set?

Judi, I don't know anything about Tuscany, but in the book, the author flew into Pisa, and it looks like it takes place in the village of Cambione in Collina. Does that help?

Judi, Planning a little jaunt to Tuscany this summer while you're in Provence? Still incredibly jealous. I should have married a man who speaks a dead language.

I've got this book on my list of books to read. I love this sort of memoir.

Sounds great. I have published my own book on living in Italy, English version available in a few months.
In the mean time try my very short sketches, free, on Smashwords:
https://www.smashwords.com/books/view/588875