For six weeks now, I haven't run. The doctor diagnosed a stress fracture in the bone stretching just above the "knuckle" of my big toes. You know, the bone that you can feel on the top of your foot.
She said, "We could xray it, but it doesn't always show up on the xray, so we'd treat it the same way. Stay off it."
My version of "stay off it" might be slightly different than her version. I stopped running. But, I didn't stop walking or bike riding and I added P90X to my daily routine. I didn't run though.
I blame my running shoes. My $120 running shoes.
Like a lot of runners in Columbus, I go to a fancy running store to buy shoes. Frontrunner has me carefully fitted. It encourages me to run around the building with the shoes on. If I take them home and run in them for two weeks and they don't work, I can exchange them.
I've always had neutral shoes. That means I don't need any correction -- collapsing inward on my arch or rolling outward on the outside of my foot. This time, the woman convinced me to get a pair of shoes that had "a little" correction. She said I could use it on my left foot, which is probably why I got a stress fracture on my right foot. It didn't need the correction!! 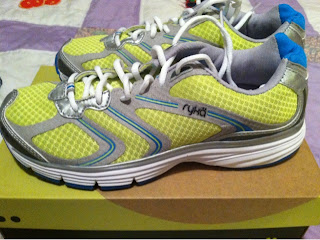 Anyway, I decided to go to Famous Footwear for my new running shoes. I found this pair for $39. I'd rather pay less if a pair of shoes is going to mess up my runs. I had a pair of Ryka shoes long ago for aerobics and liked them. I hope I fall equally in love with these Ryka running shoes.
Yesterday morning, I pulled on my long unused running clothes and laced up my new shoes. Then I stepped outside to the quiet of the morning.
Ahhh. That's probably the part I missed the most. I walked to the corner as my "warm up" and then I began to jog. It felt weird, like my body had forgotten how.
Was I landing too hard?
Was my heel hitting the ground first?
I worked on modifying my run until it felt more natural, trying to remember to kick up my heels and land on the ball of my foot.
Since it was my first day back and I didn't want to push too hard, I had already decided to run a block then walk a block.
That worked fine until I came to a busy intersection where I should have stopped running and walked. But a couple of other women were walking and cars were around -- I was too proud to stop running. I ran two blocks then walked a block. That was my pattern the rest of the 2.4 mile run/walk.
So, how did it feel?
I loved breathing the early morning crisp air. again and listening to the birds call to each other in the trees overhead.
I didn't love the jiggle.
Do you know what I mean? When I'm running all the time, I don't feel the jiggle, but running for the first time in six weeks, I did.
I had noticed that in spite of my P90X, I felt some extra love handles on the back of my hips just above my butt. And that is the part that jiggled when I ran. When I jiggle, I itch. It drove me crazy not to scratch those jiggly new love handles.
The shoes were fine. The bottoms of my feet felt a little sore. I picked some shoes that are close to "natural" which means they won't give me a lot of padding.
And I had already decided I wouldn't run again today. I am making myself wait a day in between so I don't overdo it.
I'm already itching to get out there again tomorrow, to increase the distance I can run without walking, and to eventually get back to my running friends along the trail.

I ha d those running shoes made for women and loved them.

You are so funny. Love the new shoes. Hope they work for you. Happy for you that you can run again.