Have you ever made mistakes that haunt you?
Yesterday at the library, I saw a little girl who reminded me of a big mistake I made.
I was walking down the stairs at the library. The stairs are open to the main floor all the way down. I was on the third floor and as I reached the second floor, a little girl came marching up the stairs. She had blond shoulder-length hair, a pink sun dress and pink flipflops that flapped against her feet as she took the stairs. I smiled. She seemed determined and confident. The girl was probably 5. I expected to see her mother walking up the stairs behind her, maybe lugging a younger sibling. But the girl turned toward the 3rd floor and continued on up the stairs alone.
I didn't say anything, like "Where's your mom?" And our downtown library is not the kind of place where kids should go exploring on their own. Some shady characters take refuge in the library during the day. But the girl really looked like she knew what she was doing.
That's when I remembered that time long ago when I didn't intervene with another little blonde girl.
We were living in Michigan and had probably been friends with Sarah's family for about six months. Sarah's mom Patricia was from Arkansas. She had an adorable southern accent and that haunting ability to make every person she met feel special. In addition to her daughter Sarah, who was 5 like Grace, Patricia had a son who was a few years older. Patricia made fun of how overprotective I was. She scoffed at the booster seat I still made Grace use in the car. (In Michigan at that time, the carseat laws only required a carseat up to age one.) 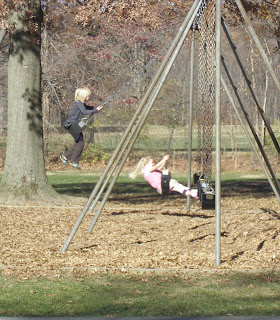 We were at Shakespeare in the park, and the green, grassy hill was covered with families watching the play below. Some of the kids climbed to an open gazebo at the top of the hill. I went to check on them. There were several little kids, like Grace and Sarah, along with an older boy. Sarah was sitting on a low wall swinging her legs and she introduced me to the older boy. I don't remember the boy's name now, but I said hello to him and asked Sarah how she knew him.
"He's my friend," Sarah said.  I wasn't clear whether he was a boy she knew already or had just met him. I sent Grace down the hill and considered whether to make Sarah come down too.
I remember feeling torn. Patricia thought I was too overprotective already. Would she simply roll her eyes and allow Sarah to traipse back up the hill? I decided to walk back and tell Patricia then let her decide. I looked at the boy, figuring he wouldn't do anything stupid knowing an adult was aware of him.
Then I started back down the hill, making a beeline for Patricia.
That's when I saw Spencer and another boy throwing acorns at each other. I stopped to redirect them. It didn't take more than a few minutes to talk to the boys, but during that pause Sarah ran past me sobbing, straight to Patricia's blanket.
"Oh, no." 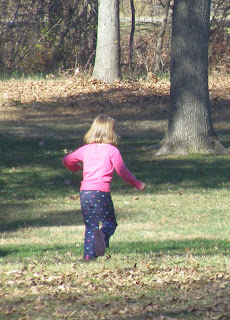 I went running over to the blanket.
"There was a boy," I gasped as Sarah sobbed and hid her face against her mother.
As we pieced the story together, I remember Patricia's eyes piercing me as she said, "You sent your daughter down and you left mine?"
And, I had. I didn't think about it as a sacrifice of her, but I had protected Grace. Grace wasn't the type of kid who would have allowed a stranger to get close anyway, but Sarah was an open, welcoming child. She didn't know a stranger.
Sarah had sat on the boy's lap and he clapped a hand over her mouth then put his other hand in her panties. I don't know how Sarah got away.
Our husbands went searching for the boy but couldn't find him. Patricia took Sarah to the hospital for an examination and the police asked lots of questions.
As the adult who had seen the boy, I answered police questions and tried to come up with a photo sketch. A year or so later, as we were getting ready to move to Ohio, the police came by again with a number of photos. The boy's photo I identified was already in custody.
But little blonde girls, like the one at the library will always remind me of the time I didn't protect a little girl.
at June 07, 2012

I'm going out on a limb here.... but so did you in such a well written and powerful piece.

My heart is pounding as if this just happened,and happened in front of me.

The other part...sometimes if someone needs to blame me for something that in a moment of trauma,(for instance something a mother would not be able to live with)...in that moment, in the deepest part of my soul...inside I let them blame. You are not to blame, no one probably is.

Just Me, Thanks for reminding me that I need to forgive myself. I think I have. But I do need to accept the blame. Not that I could have predicted what might have happened, but I always needed to err on the side of caution to protect kids -- not from scraped knees, but from big things, like people who would hurt them. I think this awful incident helped make me a better mother, and I was able to raise my kids keeping them and their friends safe for the most part.

It can be such a scary world. Child molesters are at the top of the list of awful things.