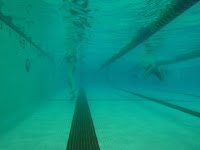 The kids usually work a 4 or 5-hour shift at their respective jobs. Grace has been a lifeguard since she was 15. She usually prays for rain so she'll get sent home early. This year she has added a second job. She's a barista at a coffee shop that just opened in town. She's hopeful that she'll get enough hours there that she can eventually drop her lifeguard job. She's right. Someone as pale as she is shouldn't sit in the sun six hours a day.
Spencer is still working as a busboy and dishwasher at a local Italian restaurant. He leaves for work looking like a young Frank Sinatra in his black pants, white shirt and skinny black tie. The restaurant was a good job to have throughout the school year because they would limit him to two nights a week so he could get his homework done, and they didn't mind that he couldn't work at all during basketball season. Now though, with college looming, the three nights per week that they schedule him may not be enough. He's checking into a second job that he describes as "moving furniture." 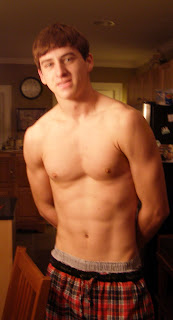 He came home from a grad party yesterday having chatted with an art students about models. She told him he could make up to $400 per hour if he modeled nude. "I may have to look into that," he said.
Okay, he has a very sculpted body, but he can't sit still for 10 minutes, much less an hour. Maybe he should be a model for a photography class instead.
Tucker started his first job this summer and he's working at the pool down the street from us. That means he never has to ask for a ride, which I'm thrilled about. (He's scheduled to take his driver's test at the end of June.)
Tucker spends money like water. We've already been talking about budgeting and deciding how much money he can have to spend each week. He wants to order NetFlix for the Xbox: $10 per month. He needs new headphones:$20 (and since he leaves them laying around where the cats chew on them, we should schedule that cost every month too). Then he needs money for eating at Taco Bell, Wendys, Panera, Noodles, every restaurant within a 5-mile radius. He does not appreciate home cooking. We haven't even talked about taking his girlfriend out on real dates or putting gas in the car once he starts driving.
Tucker's first paycheck comes this week, and I am looking for a summer of not doling out spending money. I hope my kids will be self-sufficient, at least when it comes to money,  through August.
Meanwhile, I'm still working my two teaching jobs, Earl has his full-time job and we start making college payments for two kids this month. It's no wonder dollar signs dance in my head.

It's great that they were able to find jobs- not an easy thing to do these days.