Losing Wisdom -- Teeth, that is

Spencer had his wisdom teeth out on Friday.
Our dentist has it down to a science, mixing a concoction of steroids and ibuprofen for the swelling, antibiotics to ward off infection, Vicodin for the pain and a handful of feel-happy pills to relax his patients before they arrive. 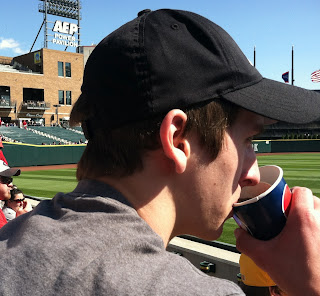 Spencer wasn't very loopy when we went. He sat watching the Disney movie Cars while the dentist surgically removed his bottom wisdom teeth. Then Spencer stumbled out and we drove home. He was fairly talkative around the pieces of gauze stuffed in his mouth. The movie melded with reality and he felt like he was in the movie, he explained. He also thought he must be seeing double cause he thought there were four people working on him.
"Could have been," I said.
"What about there?" he asked. "Is that one motorcycle in front of us or two?"
"Just one," I told him.
"Is that girl walking two dogs or one?" he asked.
"One dog," I replied.
Then I looked over and saw him repeatedly punching himself in the jaw.
"What are you doing?" I asked pulling his fist away.
"I can't feel anything," he said.
"Well, you'll feel it later," I warned.
Having wisdom teeth out around the age of 18 seems like a normal teenage ritual. It reminded me of my teen years when David, the boy up the street, had his wisdom teeth out. He was about five years older than me and his little brother was one of my best friends. Like a lot of younger girls though, I had a major crush on the older brother.
David lay on the couch in the family room, his cheeks swollen with gauze, wiping drool and blood from the sides of his mouth, and he had a captive audience in me.
He had seen the movie Alien the night before and he described the movie in great detail. I'm pretty sure his description of the movie was longer than the actual movie.
I hung on his every word and counted it one of the highlights of my summer, earning the one-on-one attention of that older high school boy
And that was my first encounter with someone under the influence of whatever drugs they used back then to take out wisdom teeth. After that, whenever someone was having their wisdom teeth out, we'd plan to gather wherever they were recovering so we could hear them talk, and make fun of them later.

I remember when my son had his out -- he was knocked out for the rest of the day! Hope your son is feeling better soon!