I'm not good at hosting parties. Some people are. I can plan the party, but I'm kind of dreading it the whole time. I can make the food, clean the house. I have a husband who works hard to trim the yard and hang plants. He sets up tables and canopies. Still, I have this feeling of dread within. The whole time, I can't wait for it to be finished.
If I'm having a small party with friends, I enjoy it while they are here, but I still dread it ahead of time. For a big party, like the graduation one, I don't even enjoy it in the middle. There's always ice to get from the freezer, coolers to restock, pasta salad to fill from the bowl in the refrigerator, sangria to pour in the bowl from the refrigerator. I try to greet everyone but feel like I have no quality time for anyone. All of those things make me a bad hostess.
We held Spencer's graduation party with two other families. One of the families has twin boys, so we had a total of four graduates. We estimated 130 people might come. I think we had more than that. 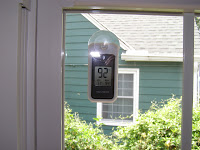 The day was incredibly hot -- in the 90s. Although we took no pictures of the graduates or their friends during the party, for some reason, we got a shot of the window thermometer to remember how hot it was.
Before the party, the house was a chilly 72. Once people started coming in and out of the doors, and the house filled up with people, the air conditioner worked non-stop but couldn't cool things off.
Outdoors, we had canopies and fans that mist along with a spritzer to stand in. We blocked off the alley behind our house and had beanbag games, along with hula hoops and sidewalk chalk. I never even made it out to the alley.
One of the dads is a chef. He cooked chicken wings in a deep fryer outside, along with grilling burgers and hot dogs.
I hugged people who I didn't know and welcomed people who wouldn't have spoken to me in public.
At one point, the house was so crowded with high school students that a boy standing by the back door lamented, "I have to get all the way to the front door to leave." It probably took him a good 10 minutes to get through the crowd, and our house is small.
It was only later, as I was sitting in the living room with my brother, sister-in-law, niece, and my daughter Grace that  I realized, I didn't take a single picture during the party. I can't believe it!
I did get a shot of the four graduates before the party started. Here they are.

I'm always a nervous wreck before not only parties, but also just dinners. I bet your party was a huge success.

I like to host parties... but I do get anxious about the attendance... once everyone is there I am fine and I do enjoy them - especially with people I know I can relax around ... they do exhaust me though.

I hate hosting gatherings, and even dinners for people I know as well. I get so uptight and bitchy in the preparations -- my mother was like that as well.

I do enjoy myself afterwards but it never makes up for the initial stress:)

I'm sure the #'s of people and temps did not help your situation either.

I have to agree with you about parties which is why I no longer do it. It sounds like things went well.
Congrats again to your son!