I Have My Sink Back

Since last September, I have been without a dishwasher.  That means, my sink has been full of dishes for eight months. No matter how often I washed dishes, turning them upside down to dry on a dish towel next to the sink, someone else would need a drink of water or a bowl of cereal or a grilled cheese sandwich, and those dishes would go straight back in my sink. 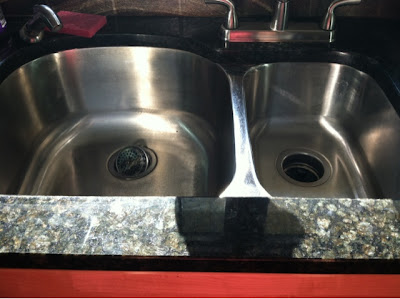 I complained before about the new dishwasher in our house when we moved in four years ago. As a matter of fact, I called that post "The Worst Dishwasher in the World" and I still stand by that.  The dishwasher never worked well, so when it quit working in September, we didn't even think about fixing it. We waited out college payments and study trips abroad, tax payments and fixing the dent in the side of the car after it got hit in a parking lot and no one bothered to leave a name. Then finally, in this brief respite between college payments, we had the car dent fixed and, after much research, I dragged Earl into an HH Gregg where we picked out this sleek and lovely dishwasher. It isn't top of the line, but it washes the dishes, which is more than I can say for the previous dishwasher. And it's stainless steel, so it matches the rest of the appliances in the kitchen. 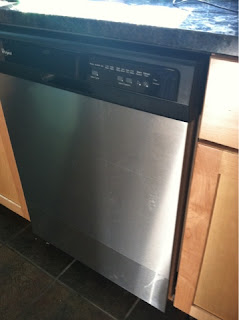 Yesterday, Earl spent the day installing it while I got a haircut then went to a track meet. When I got home, the dishwasher was humming along nicely. I took the opportunity to clean the sink and prepared to remind my children, who have been happily dumping dishes in the sink for months, to place them in the dishwasher instead. I'm so happy!
Hope something good happened to you this weekend. I can't believe you'll top the new dishwasher though.
at May 20, 2012

OMG! Yes, a dishwasher that hums along is a definite wonder.

I have a dishwasher, and I've been in this condo for five years, but I haven't used it once!

Not because it doesn't work, but because, with just one person living here, it's easy to wash each dish as I use it, placing it in the cute little wooden rack where I also have some decorative dishes that stay there.

When I do have company, I use the pretty china...and I'm afraid to put it in the dishwasher!

I'm glad you finally have yours, though, as it sounds like you needed it!

Aww the joys of modern conveniences that are hard to live without.

Oh, I would love a dishwasher. I seem to spend my life washing up, and dirty dishes seem to breed - the more I wash, the more there seem to be.

That's good. We did without a dishwasher for a few years, after it wouldn't work after we moved house. Then we went rented a holiday cottage which had one and realised what we were missing - got one straight after coming home.

Thanks for your lovely comment on my blog - much appreciated!

Our dishwasher had a secret leak underneath and now the wood floor in our hall next to the kitchen is warping. The neighbor downstairs had ceiling damage from it too. Still, I love the convenience.

LOL.... I wouldn't even try to top a spanking new (stainless) dishwasher.

Utility sink faucets have been made out of s / s, essentially the most tough substance available in terms of to be able to take heavy make use of as well as outside subjection.

I actually love the design, the stainless steel appeal makes it look so very durable, and it’s actually advantageous since it can withstand greasy or sticky liquids like oil. It’s impressive that it complements your countertop. It’s amazing that one part of the kitchen can make the whole area look elegant.