The other day, I went to Noodles & Company to buy the kids dinner before I taught an evening class. As I was leaving home to get the food, Tucker called out, "Will you get me a drink from their fancy drink machine?"
I didn't know what he was talking about, so I told him to come along. And he did. Here's what he showed me.﻿ 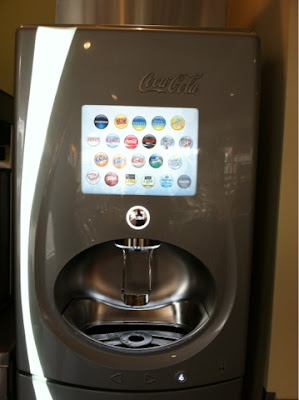 This machine has a touch screen with lots of different drinks on it. Dasani, Dasani Sensations, Fanta Orange, Mello Yello, Dr. Pepper, Barqs root beer, Powerade, Sprite, Seagrams Sparkling Seltzer Water, and, of course, Coke. But that's not the end of it.
Tucker pressed the Coke button and it took him to the next screen filled with Coke choices. ﻿ 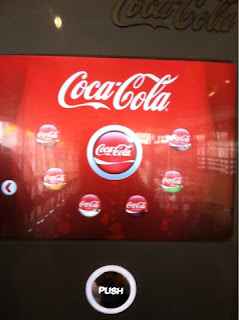 Coke Cherry Vanilla, Coke Lime, Coke Raspberry, Coke Vanilla, Coke Orange or Coke Cherry. He pressed on his choice and then pushed the black button at the bottom. His cup filled with the Coke of his choice. I should have explored more to see if every flavor of pop had as many choices as the Coke did, but I was just amazed by this machine. Finally, something similar to what the Jetsons promised us back in the 1970s.  Tucker said he saw a machine like this in New York City when he travelled there over Christmas with his friends.  So Columbus is behind the times, but I'm still pretty impressed.

When we're out in public, Tucker says don't take pictures of stuff for your blog, but here he is anyway, enjoying his fancy soda. 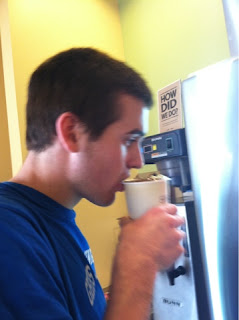 That's amazing. I wonder how often it breaks down? So many little things that could go wrong.

I hadn't even thought of that. You're right though with 24 flavors or more, I'm sure things go awry.

We haven't got anything like that here... We're well behind the times! :)