I'm in the middle of a perfect storm -- for me. A triage of circumstances have gathered to increase my stress.
The first prong in my perfect storm consists of being annoyed and snapping at everyone -- friends, family, students. I'm beginning to suspect menopause, although I haven't had any of the other outward physical signs.
The second edge to my perfect storm comes from the fact that I can't run right now. Running is obviously a stress reliever. 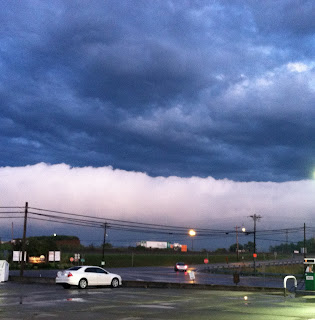 The third corner to my triangle of stress comes from watching a second kid getting ready to go to college -- but it isn't the departure that worries me; it's the bills that have already started piling up -- senior pictures, senior grad party, college deposit, college payments. If I wake up in the middle of the night, I have to avoid thinking about money or I'll never get back to sleep.
I'm so vulnerable right now to falling over the precipice, that when I received an observation report from work, I didn't open it. I just feel like any "constructive criticism" might be too much for me. I'll wait til I'm in a better place.
So, already feeling at risk, I opened my email yesterday and found a rejection from an agent. Gulp. But this was such a positive rejection. (Is that possible?) Here's the part that assuaged my prickly emotions:

You appear to be a talented writer and I admire the dedication and energy I could sense from your letter.


And this was just a query letter, not even my novel. Yes, in the end she didn't accept my novel, but I appreciate that she took the time to build me up a little first.
I got another ego-building email from a man I met at the writing conference this weekend. My husband would probably say I'm naive and the guy was flirting with me, but I like to think his flattery was genuine.
As we ate lunch at the writing conference, he told me he was a retired psychologist and wrote thrillers. He asked for advice on query letters -- those are letters that writers send to agents seeking representation. I told him I had some notes from a previous conference that I would send him, so he gave me his email. After I sent the information, he emailed back a thanks along with these kind words:

I hope you get to do a pitch face-to-face; you come across so great in person: winsome, so likeable, but quick-witted and assertive. I'm terribly curious about your book and wish you could write full-time!

I don't think I've ever been described as "winsome." It seems young -- like anything is possible. So maybe I'll forget about the whole menopause thing and concentrate on being winsome, even if it's only retired psychologists who think so.

I bet you are winsome and just don't know it. I woke up at 3:30 AM the other night and couldn't get back to sleep. I'm not sure why that happens. Some sort of stress I'm sure.

you'll find a way. you always do.
i've always thought you were winsome, by the way. (and I agree with Earl)

I am so glad that the negatives were balanced in the end by positives. It is hard to keep going when money looms and when others can delete an opportunity for you when you have spent precious hours on a work. It often seems that some people just glide on into things leaving the rest of us struggling for recognition. However, you have your blog friends who support and understand and who will be there when it all happens for you!

You Are all he says and more. I wish I could take your burdens, not add to them. I love you more than any other adult I know

I totally agree with the retired gentleman. Leave it to a writer to put into words thoughts and feelings I've had about you for years !

What a wonderful purpose you and your fellow writers have !

I can relate to being ready to fallover the precipice - I'm there myself right now. I cannot imagine not being able to run right now though. That would surely push me over the edge.

What about swimming? LOTS of swimming . . .

It's probably all of the above, but I hear you. This is one thing I've learned in France. Accept winsome, accept flirting and take it as your due respect, accept your age, and don't feel bad if you're a bitch. This is the French woman's recipe. Just sayin'

I know about those query letters. It's been awhile since I sent one, but I remember the rejections. Guess I ought to brave the storm and do it again.

Those were kind words. Read them over and over when you're having a day over rejections.

Which conference would that be?

Rain come my way and spray some spring on my day.
To all the mothers and grandmothers-Have a very happy day.