Sometimes my boys come up with crazy ideas that just make me shake my head and laugh.
This week, it was Spencer who admitted that he had started a home-based business. Well, not so much home-based as locker-based business.
Spencer and three friends noticed the effect that Michelle Obama had on the snacks in the school. As seniors, they were used to pop machines and unhealthy snacks in the cafeteria. When our schools phased those out this year responding to calls for healthier food, Spencer and his friends decided to fill the niche for junk food.
They went to the store and bought $40 worth of candy, chips, Honey Buns, Pop Tarts and pop. They sell it from their locker. 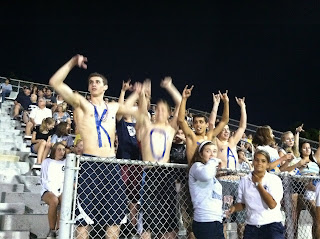 This week, they made $60 so they got a 50 percent return on their investment.
"Wait a minute!" I said. "Is this against the rules?"
I mean, he wasn't selling anything illegal or even convincing students to take supplements that would make them stronger or smarter.
One of the teachers said she didn't think it was a big deal, so Spencer considers that carte blanche.
I drove five sophomores, Tucker and friends, to an away football game last night, and they were talking about Spencer's business.
"Oh, yeah. I bought a Reese cup from him for 25 cents," Josh said.
"That's a rip off," Tucker said, determined to find fault with his brother.
I pointed out that a two-pack of Reese cups costs around $1 at the grocery store.
"Dude, he's gotta have a profit margin," Josh said.
Keenan added that the pops are $1.
"They used to be 65 cents in the pop machines," Tucker said.
Well, the pop machines are gone.
Maybe I should just be proud that Spencer is showing some entrepreneurial spirit and not worry about the repercussions. Like him, I do believe that the kids, who are allowed to leave school for lunch, will probably eat all the junk food they want whether the school supplies it or not.
Maybe I should see it as a sign that he's ready to leave school and start his real life, which is what he'll be doing at the end of this year.
Maybe, I should realize that he has great ideas, like me, but apparently he is willing to follow through on them.
I just hope he can stay out of trouble for the rest of his senior year.
at September 18, 2011

Spencer is going to be a success. He has the mind of a true businessman...LOL funny story

This is the delightful side of I told you so ..... still promise myself not to say it ... smile

He has an entrepeurneur spirit which is a good thing. I'm not sure if parents would agree.

I love it! Good luck to Spencer!

I love this story, I can't wait to see how it all plays out.