All in a Muddle

I think I spend my life saying things will settle down when...
But I need to be honest, things are not going to settle down.
Lately, things have been more hectic than usual. I've been mired in numbers trying to get Grace's trip to France organized. 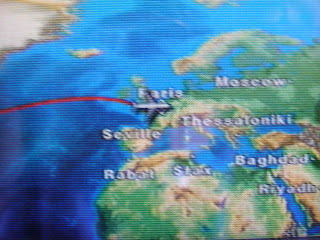 Maybe she'd fly over with Sheila when she went for fashion week. Maybe Earl and Spencer would go over with her for a week? Would she go alone? Would they fly into Milan and visit the Italian cousins before going to Paris? Maybe Frankfurt would be better. Maybe they'd fly into Milan and fly out of Paris. But Earl would be leaving much earlier than Grace so how would I make sure they sat together on the flight out?
I spent days on travel websites. I'd go from Kayak to Priceline to Expedia then to the airline's website: British Air, Air France, American Airlines. I had every possibility written in a little notebook. Then we had to add in train fares and hotels. My mind spun with all the possibilities.
In the midst of it, I started another semester of school at one college and was busy moving toward exams in the other. That's when Labor Day arrived. A time to rest and catch up.
Only, as I was fixing brunch for Earl's family on Monday morning, I received a text that my friend from work, Rini, had a stroke. I made plans to go visit her the minute the relatives departed at 12:45. At about noon, I was walking around the block with baby Caroline when I saw what looked like Spencer standing at the intersection at the top of the hill. That tall boy with the cut out tshirt was definitely my son and he was standing beside his car talking on the phone. Then I saw the police car and the flashing lights. Oh, no. Had he gotten a ticket?
I left Caroline with Grace and raced ahead. The front end of his car lay on the street and green radiator fluid leaked onto the street in front of it.
He had an accident while crossing the side street to our house. The small truck he hit looked fine. A little scraped on the side. 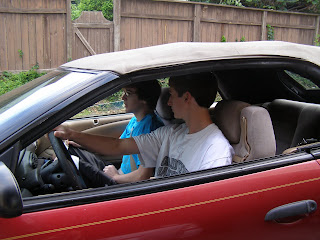 Spencer told me later that the truck basically drove over his front end. But the accident was his fault. Now we started dealing with car insurance and juvenile court to face the ticket for failure to yield.
In spite of the accident, I headed to the hospital at 12:45 and saw Rini. I feel so helpless when people are sick. There's rarely anything I can do to help. So I jumped right in and told Rini that I would grade her remaining essays and give the final exams for her classes.
Well, I'm getting tired just telling this story. Picture me chained to a computer grading papers, searching for airfares while looking for used cars to replace the totaled car, when suddenly I remember that I have to figure out the cell phone dilemma for Grace too, so I start researching that.
On Tuesday morning when the English department called in a panic that no one had finished Rini's grades, I jumped on the computer again rather than going out for coffee with Grace and finished Rini's grades.
Grades are done for one college job. Tickets are purchased for the trip to France. The phone is ordered. The insturance money for the car is in the bank, although we are still a one-car family for now. Rini remains in the hospital waiting for a spot in a rehab center.
Now that I think about it, it seems a little selfish to complain about all the work I have to do because my friend had a stroke and my daughter's headed to France for a few months. I'm grateful that I can help out my friend and that I have a daughter who's about to experience the trip of her life.
I'll quit whining when things settle down...
at September 14, 2011

jGosh, makes me tired just to read about it. My life didn't settle down until all of my kids were out of the house, and one ex was basically out of my life.

It's just life...I don't count that as whinning.

You can borrow a glass of whine from me anytime. Your story was cetainly whine worthy.

you gave us "just the facts ma'am".
No whining here.
After all that, I was hoping there was a ticket for you to go to Paris too!

PS - remember to get your cape cleaned wonderwoman <3