Happy Birthday to my Husband 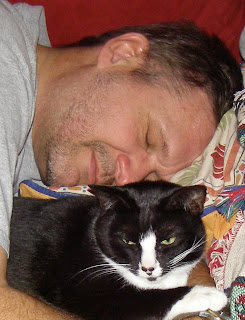 Today, my husband is officially eight years older than I am. But that only lasts for two months.
This has been a big year of change for him, for our family. His job has changed, some parts better, some worse. He works eight hours and is finished but he has to work evenings. He doesn't bring work home with him, but he doesn't look forward to going very much.
Since he is home during the day, we have a lot more together time when I am not teaching. There are times when he expects me to have equal free time, but "not at work" does not equal "free time" for me. He has picked up the slack I left behind with the housework and laundry. When I have worked all day, I often come home to a clean house, piles of folded laundry waiting on the bed.. 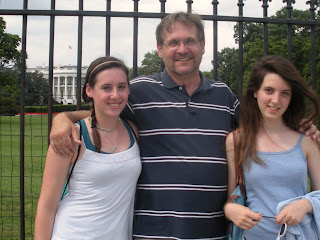 When we married nearly 20 years ago, I knew he was a nice guy, but I was too young to know how wisely I had chosen. I saw that when the waitress dropped a tray, he got up to help her. I saw that when he refused one of the many homeless people in Key West who asked for money then later saw the woman sleeping in a car, he knocked on the window of the car to give her money. He was obviously a decent person.
Over the years, if anything, he has come to love me more, and I don't know how I got so lucky. His first thought is what will make me happy, what will make things easier for me. And, although he ocassionally guesses wrong, or causes a flap with the kids, I know that his motives are true.
Sometimes we fight. Sometimes loudly. But underneath, I feel very blessed that I married a man who has grown with me instead of apart from me.
And this afternoon, when the romantic lunch we had planned fell through as the kids chose to skip this swim practice and stay home, he shrugged and drank the mellow glass of chardonnay. He knows that, although today is a special day, it won't be the last opportunity for us to share a romantic afternnon.
Happy birthday, Earl.
at December 23, 2009

I made a good choice too-the second time. It's nice to be with a truly nice man.

Happy Birthday Earl - we the running mates love you too !

You are almost as lucky as he is.