Lessons From a Grownup Child

No matter my age, when I visit my parents, I'm a child. So I should have anticipated that there would be some resistance to a trip where I planned to help them out.
Dad has had an ongoing battle with a wound on his foot that won't heal. This follows on the tracks of sciatic pain and a bout of salmonella that sent him to the hospital. It has definitely been a challenging year for him at age 78.
The sore on his foot is a problem because he is diabetic. They're going to do surgery to unclog some arteries so he gets better circulation and meanwhile, he's spending two hours, five days a week in a hyperbaric oxygen chamber, or as I tell the kids, the chamber of secrets. 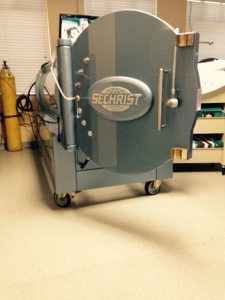 Mom and Dad are reluctant to accept my help. Dad wants to hold the door for me when we get in the car. Mom wants to make me a protein shake after I run.
They apologized a dozen times that I had to take the trash out.
I drove Dad to the chamber yesterday while Mom played golf. She was meeting us at the doctor.
Although Dad claimed he could get changed on his own, stretching his shorts over the cast and pulling on scrubs before putting the walking boot back on, he seemed agitated when mom showed up. He wouldn't let me help him get changed.
The one thing I've learned is that if I want to be helpful then I just need to do whatever my parents want. Church where the prayer includes comments about the election and "taking our country back" -- no problem. Switching to the lane Dad suggests and driving at the speed he usually drives at -- okay. Leaving an hour early for a doctor appointment that is 30 minutes away -- I'm ready.
Drink a protein shake, eat the melon they left out for me -- I'll try to just smile and go along with it.
Going to the oxygen treatment turns out to be a 4-hour odyssey. But they're both being fairly calm about it, and truthfully, they don't need my help. I just want to feel useful, as if I can take some of their burden away.
So while Dad was in the oxygen treatment today, Mom and I went to have our nails done. 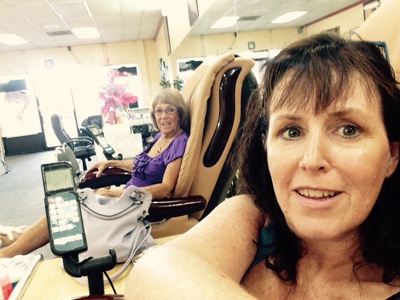 And this morning after I ran, I enjoyed a dip in the pool. 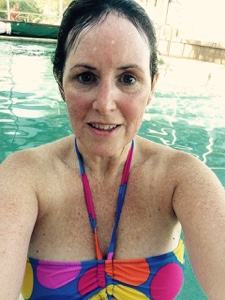 Your realization that you need to help your parents more than your parents need your help right now is very touching. It's a fine balancing act, helping those we love but allowing them their dignity. I think we all just want to feel forever our best, strongest selves. I've already begun to bristle when my 22 year old says "Here mom, let me help you with that" I tell him 'I'm not an old lady yet kiddo' but I know he just wants to be helpful. Enjoy your visit, enjoy the manicures, and especially taking back the country, LOL!