This morning was glorious, not just the weather, but the fact that I didn't have to go to work.
I've been teaching six days a week, but one of my colleges just finished until Aug. 31, so I'm only working three days a week.
Don't feel bad for me though; the number of hours I work is pretty pitiful. It just mentally took its toll because I didn't have two full days off.
This morning, I decided to ride my bike to the gym. The bike trail is smooth and safe, but I take my life in my hands a bit getting to the bike trail. 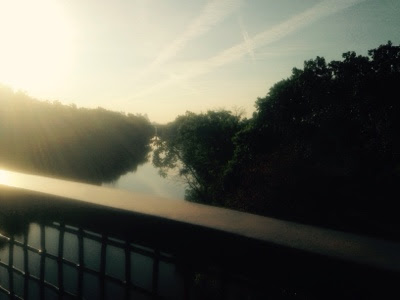 Our town definitely needs to work on that. Part of the ride is along a four-lane road. I figured early in the morning, I should be safe.
After my workout at the gym, I got on my bike to ride back home, but the intense blue of the sky convinced me to keep going.

I was one of those obnoxious people saying "Morning!" to anyone I passed. Most of them were on their way to work, however, so their greetings were not as effusive as mine.

On my way to the gym, I passed a family walking on the trail. A mother with a little boy, maybe five  years old, and a grandmother. When I rode my bike to downtown Columbus, I passed them again. They had walked all that way. I can't imagine my kids able to walk that far when they were little. People have lives that we know nothing about. They greeted me with a cheery hello each time I saw them, because I turned around from downtown and rode back home.

On the bike path near Confluence Park, which is where the Scioto and Olentangy rivers come together, I saw a love lock. Etched on the lock were the names Chris and Sara. Then the date, 7/13/09. Since it's the only lock attached there since 2009, I guess this bridge isn't going to become one of those "love locks" bridges that becomes weighed down by locks.
When I returned home, I convinced Grace to get out of bed and to walk to the coffee shop with me. Usually, in August, the air in Ohio is heavy with humidity, but the past few days, the humidity has dispersed and that makes the sky sparkle.
We enjoyed a bonding mother/daughter time before she had to get ready for work.
Then Tucker came into the kitchen,  ready for work, and we actually had a good talk. He's going to consider maybe going back to college. I'll take that little sign of hope.
at August 05, 2015

Your pictures have me right there with you. Glorious is the word I would use too.

What a wonderful start to your day! I hope the rest of your day continues to be just as delightful : )