Yesterday we traveled to Kentucky for my cousin's daughter's wedding.
We love Morgan. She's one of those people with an infectious enthusiasm for life. She looks like she should be a weather girl on a local television station and her southern accent just melts my heart.
The announcement at the beginning of the wedding requested that people refrain from taking photos during the wedding, to be in the moment instead. Which I did.  However, other people didn't, so I stole one of their pics off Facebook. 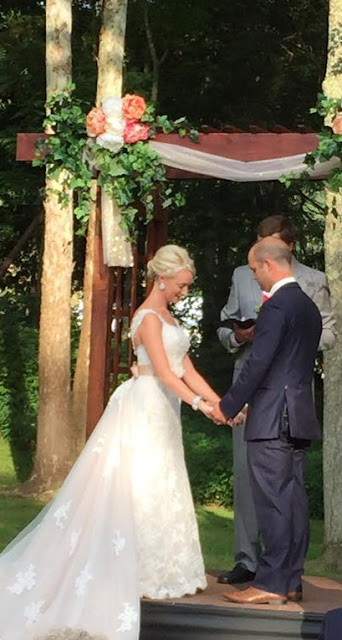 During the reception, we took advantage of the photo booth. 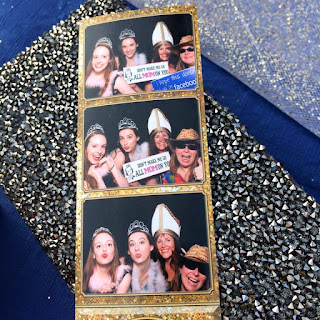 That's me with the mitre hat, next to Grace and my niece Caroline in the tiaras, and my sister-in-law Dawn in the cowboy hat.
I took a nice photo of my cousin Mike dancing with Morgan. He cried as he walked her down the aisle and couldn't hold the tears back again as they danced. 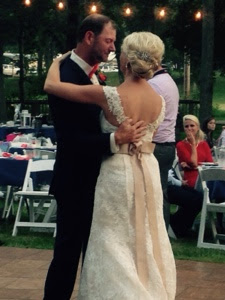 But my favorite moment was the throwing of the garter.
Grace and Caroline joined the single women for throwing the bouquet, but Morgan turned around and handed it to a friend. 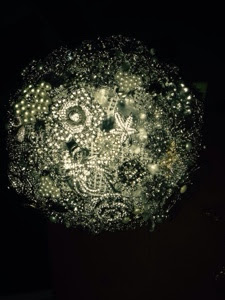 Here's her actual bouquet, which she didn't throw. It's made from brooches.
Spencer didn't seem to be inclined to join the single guys for the garter toss.

We told him the goal was to catch the garter. We didn't explain that meant he would be the next to get married.
He lined up at the end of the group of guys. Then we saw him flexing his knees.
Being a bit competitive, Spencer takes a challenge quite literally. Of course, he played  basketball for years and he has many jump balls under his belt. When the the garter was in the air, he went up for it, like a basketball, leaping in front of all the other men to snatch it out of the air.
Why, oh why, didn't I videotape that?
Here he is with the garter. 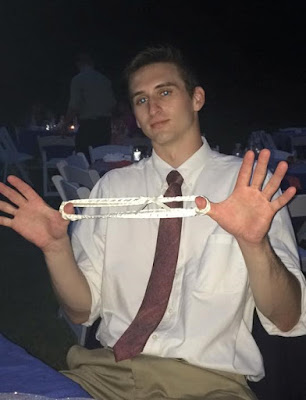 I don't see a wedding in his near future.
We had a hotel and planned to spend the night, but when we got back to the hotel room around 10, I suggested we just drive home. Earl's a night owl, so he agreed to drive.
Spencer, who generally doesn't get home until 2 or so, said he would help drive too. He fell asleep by 11 and slept hard until we woke him in the garage at 2 a.m. and he thought we were at the hotel.
at August 09, 2015

What an interesting bouquet. I have never seen one like it. What a pretty wedding & so funny about the garter! Glad you made it home happy & safe.

What fun. I think I met Morgan? She was such delight.