We spent the day on a green field watching the high school tournament for Ultimate Frisbee. That's where they play frisbee similar to soccer with the team moving the disc down the field to score in the end zone.

Tucker played last year, and the team only won two games all season. This year, the team was undefeated in their season. They played three games in the tournament and win all three. They won their first game this morning then lost the second. They play one last game to see if they make it to states next weekend. 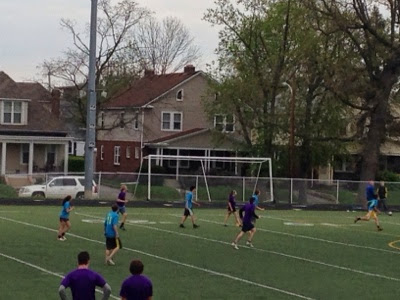 The sun has been intermittent and the wind has been strong, sending the disc sailing into the air and gathering salty granules at the corners if my eyes.
We had to leave before the third game to go to a graduation party then make it to dance class.
The rules for ultimate frisbee are hilarious. They seem to be created by some laid-back California-type dudes. The game is supposed to go til someone scores 15 points. But during the tournament that changes to 13 points and if the game is long, maybe 12 or 10 points. It's fluid.
The coach calls out , "Chill." He doesn't yell at them to "Hustle."
There are no refs. No team members call their own fouls against the other team. They also call the scores.
Tucker caught a throw, jumping into the air and landing on his back over the goal line. The other team started to argue about whether he had scored.
"Look I can't tell you whether you scored," our coach said to Tucker. "You have to look inside yourself." 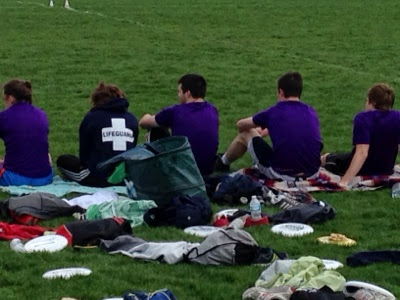 It cracks us up, but also helped us realize why the kids maybe didn't want parents there throughout the season. The parents get more competitive. They yell out, "Foul." The set their clocks to see when the time will expire.
The coach says, "Easy, easy."
One mother says she was at a game when someone showed up with a bucket of fried chicken. It was an automatic time out while everyone ate chicken.
We'eve only made it to a couple of games at the end of the season, but we can see why Tucker loves this game. In addition to running up and down the field and making leaps into the air to catch the Frisbee, they all work together as a team. They're mellow.
Too bad we didn't have four whole years of watching. The other parents and I are pretty sure we might be partaking of things to make us more mellow while on the sidelines.
at May 04, 2014