The graduation party is today, so, of course, I woke up at 4:07 a.m. with a litany of all the things I need to accomplish. 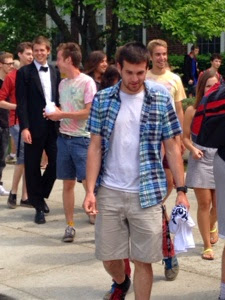 I lay in bed until 5 before I got up, only to find Tucker asleep on the couch in the living room. I don't know why, and won't know until he wakes up later, so I'm creeping around the house in the dark to let him get a little more sleep.
I wonder if sleeping on the couch has anything to do with the fact that he got hit by a car two days ago as he was riding his bike. He's okay, just skinned up and shaken up.
He called me right after it happened. It makes me feel thankful that his first reaction is still to call mom.
He wouldn't let me come get him, said he was walking the bike home, but we both were shaking when he came through the back door, his palms, elbows and knees bleeding.
The car just pulled out in front of him and hit his front tire throwing him off the bike. The car didn't even stop. 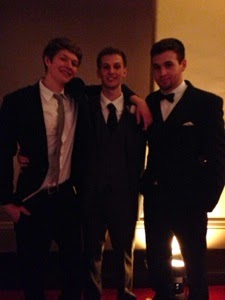 Other than asking me to put Bandaids smeared with antibiotic ointment onto his palms and explaining why he can't help with yardwork because of his wounds, he has acted like everything is fine.
I vented a bit on Facebook about the car that didn't stop, and an old high school classmate sent me a message, saying she knows how difficult this time of year is for our family.
Yes, that adds to the tension. A graduation on Memorial Day, just like my sister's graduation on the weekend she was killed.
A party planned.
We're so lucky that Tucker walked through the back door, and I guess that puts my worries about a party in better perspective.
This weekend, we'll celebrate and not worry about whether the house is clean enough or the lawn is perfect or the food will last through the crowd.
at May 23, 2014

Oh my gosh Paulita I am so glad he is ok! Of course you needed to vent about the driver! How really upsetting ....but thank goodness he is fine & the party will go on & I am sure be a great success. Happy graduation to Tucker & the whole family!

Did you report the incident to the police?

Sally took the words right out of my mouth and even used my lingo, so I won't repeat but THANK GOODNESS. Your perspective is great. Happy Partying. Big Hugs.


Sorry I had no idea when I was bugging you with texts this morning.

How scary about your son.

I bet the party will be fabulous after all of this. Clean doesn't matter as much as everyone there and celebrating.