Every Tuesday, Diane at Bibliophile by the Sea posts the first paragraph of her current read. Anyone can join in. Go to Diane's website for the image and share the first paragraph of the current book you are reading.
I was renewing library books when I realized one of the books is due on Thursday and I haven't started reading it. I quickly pulled it from the shelf and started yesterday -- Dreaming in French by Megan McAndrew. 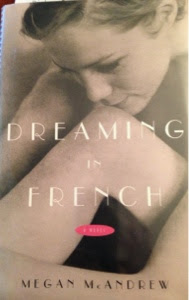 I thought I liked the cover, but the more I look at it... I thought she had her face against her knee, but it can't be her knee because it is too skinny. I'm not sure. Amazon has a different cover for it now.
Here's the intro:


Astrid became a Marxist after it stopped being fashionable, even in France, but fashion, as she always told us, was for people without imagination. How a woman who shopped at Sonia Rykiel could have discovered within herself a sudden solidarity with the working classes was a matter for some perplexity, though not on the part of Lea, who expressed the view that our mother was unstable. At sixteen my older sister was cultivating cynicism. She had also just gone on the pill, which was easy to do in those days. All it took was a visit to the clinique on Rue Bonaparte, where the darkly handsome Docteur Bernard, who looked more like a hairdresser than a gynecologist, dispensed contraception to the young sirens of the Sixth Arrondissement after the most nominal of examinations and, it was rumored, occasionally seduced one, though Lea was disappointingly not among their number. Why Lea had sought birth control was in itself cause for speculation, since she didn't have a boyfriend. But, as she grimly told me, it was better to be prepared. Grimness was a sentiment that gripped Lea frequently. Like Vera in War and Peace, my older sister saw herself as the only dignified member of a ridiculous family. She bore our mother's idiosyncrasies stoically but, in her heart, my sister thought of herself as French, and French mothers did not go to ashrams in India, or march in demonstrations, or hire Maoist housepainters, or walk around the apartment wearing nothing but red nail polish.


I'm joining in with Teaser Tuesday this week too, but the intro is so long that I'll let it stand for both First Paragraph and Tuesday Teaser.
Teaser Tuesdays is a weekly bookish meme, hosted by MizB of Should Be Reading. Anyone can play along! Open to a random page of your current read  and share a teaser sentence from somewhere on that page. BE CAREFUL NOT TO INCLUDE SPOILERS! Share the title & author, too, so that other TT participants can add the book to their TBR Lists if they like your teaser.
Looking forward to seeing all of your books.
at May 27, 2014

hmm.. I see what you mean about the cover. so odd. interesting read!

I think it is her knee. Interesting beginning too. Came see my teasers for The Truth About Alice by Jennifer Mathieu and The Lost by Sarah Beth Durst. Happy reading!

I'd have to read a bit more before deciding. It feels a little heavy. enjoy your book. kelley—the road goes ever ever on

Here is my teaser post from Night Fish by Kristine Ong Muslim .

Here is my intro post from Sufficient Ransom by Sylvia Sarno .

It does look like her knee, very skinny for sure. Enjoy.

Interesting read, as long as it is not too political?. Unless that is what you are interested in of course. Me too, I think it is her knee though the angle with her body is not quite right? Looks still nice and captivating though.

I think it's her knee, too... this could be an interesting read.

I don't think I'd enjoy this one for some reason, but hope you enjoy it. Thanks for joining us.

Maybe she just has small knees. :-)