Cougars are Mothers Too

We were talking last week after the Emmy Awards. One of the shows we enjoy, Modern Family, won awards. Spencer said he preferred the show CougarTown which comes on after Modern Family.
Courtney Cox stars in CougarTown. She's in her 40s (early 40s), is divorced, and has an 18-year-old son. She is, of course, surrounded by zany characters, including her ex-husband.
I was trying to pin down what Spencer liked about the show. Is it the ex-husband and the 18-year-old son?
He thought maybe because Courtney Cox reminds him of Friends, which is a show he likes. 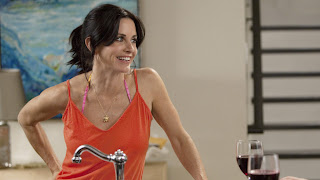 "I can't really picture Courtney Cox as the mother of a teenager," I protested.
"To me, she just looks like a mom," Spencer said.
"Really?" I asked. "Whose mom do you know who looks like that? Think about your friends. Do any of their moms look like Courtney Cox?"
Tucker piped up. "Yeah, she looks like Cathy J."
My friend Cathy has five kids. We used to homeschool together until she sent her three oldest to school so she could raise the younger two. We still go to church together and taught religious ed together until I bailed on that a couple years ago.
I wonder if she would consider it a compliment that my sons think she looks like Courtney Cox? I don't think she'd see it as a compliment to be compared to the sometimes flaky, wine-drinking characer on Cougartown.
at September 07, 2010

hi friend am a begginer in blog
ur blog sounds cool

My mother was really gorgeous as I was growing up in a movie star sort of way and my friends would say, "That's your mother?" It embarrassed me really. She wasn't your typical mother-no cookie making or that type of thing.
Did you decide to go see your daughter?

did I leave a comment here, I could have sworn I did...hmmm. Yes I have friends who look like celebrities!

Hi, this is Cathy J. I am not a cougar, but I am shallow enough to be thrilled that someone thinks I look like Courtney Cox. A mother of five must take compliments whenever she can get them, so thank you to your boys! I can't wait to tell my daughter about this. The only tv show she thinks of, when she thinks of me, is "What Not to Wear" because I have been known to wear hand-me-downs even from my son. Jeans and sweaters. That's not cougar-ish is it? I think its frugal. My daughter thinks its embarrassing.
Thanks for making my day!!!

Courtney Cox totally looks like Cathy J! (I am her sister-in-law). I never thought about that before!

Hey Courtney, I mean, Cathy J, I wear my sons hand-me-down jeans too. They fit me great.

Let's face it, if you look like Courtney Cox, it doesn't matter what you are wearing.

You guys are hilarious. It's not even the fact that Cathy looks like Courtney Cox, it's the fact that she doesn't look like a mom. She sits in church with her bare, toned arms and I'm incredibly jealous. You're not supposed to feel that way in church, are you?