When I was a little girl, my mother had a big coffee can filled with buttons. They were all those left over buttons that had come off clothing and all the buttons that she bought on the card of four or six from the store that weren't needed on sewing projects. I loved to dump out that can full of buttons and sort through them. 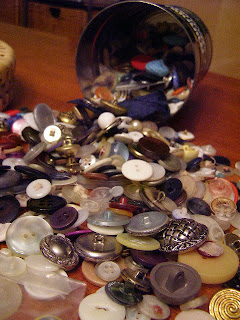 The feeling of the buttons running through my fingers was magical. And then I did what kids do naturally -- I sorted them according to size, according to color, according to shape. It's a natural Montessori lesson.
So, as an adult, I, of course, have a coffee can full of buttons too.
My grandmother, on my father's side, has a gorgeous rose-colored vase -- not really a vase, more like a glass container that stands on the floor then narrows as it rises and comes up to my waist that she filled with buttons. When my grandmother asked my mother if there was anything she would like from the house, my mom said she would like the vase with the buttons. My grandmother said she could have the vase but not the buttons. I think part of the allure of this vase/container was the buttons. My mom wanted the buttons too. I'm not sure whatever happened in this saga. Perhaps the container is still at my grandmother's house in Kentucky. She's 93.
This morning I had to look through my coffee can full of buttons for a button to go on Spencer's cargo shorts. His button had disintegrated in the middle. I wasn't worried, I knew I would find a button the right size that was compatible with the khaki shorts.
I did and sewed it on, but I couldn't resist playing with the buttons some. Even though the buttons are mine, I don't know where most of them came from.
What about this furry button? 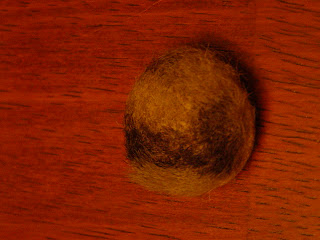 Did I ever wear anything that had this button? I don't think so.
I picked out the tiny buttons, so small that I'm glad I don't need to sew them on anything right now. 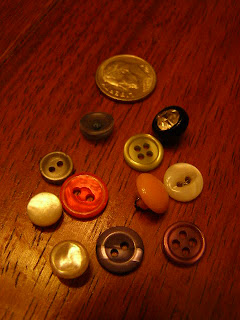 I put a dime in the picture for comparison to show how tiny they are.
I found some cloth covered buttons. 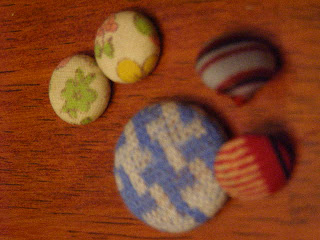 These are pretty specialized and I can't imagine that I'll use them ever again, but you never know.
And some buttons shine like jewels. 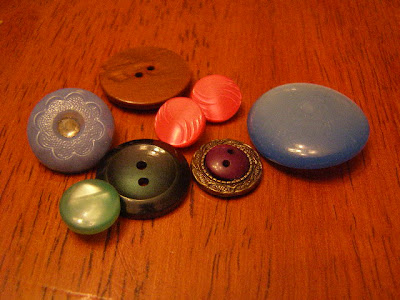 Maybe they should be made into jewelry and I could wear them around my neck. Maybe buttons should be interchangeable and I should be able to snap them on different blouses according to my mood that day.
at September 08, 2010

What about button earrings, or a button bracelet?

The buttons in the picture are beautiful. Well, all except for that furry one, which is kind of creepy.

My aunt had a box of buttons too as she sewed. My mother didn't. Somehow, I don't save buttons either.