During lockdown, Earl went to the market one day with express instructions to buy plants for our very small garden. We had heard that the plant seller would be there.

Earl put on his trusty mask and walked to the market.
Our outdoor market continued throughout the confinement, supplying fruits, vegetables, cheese and other necessities of life. We would take turns going because buying food in the outdoors seemed preferable to going into the grocery store. The town also took precautions, requiring people to wait at a distance in line and for the employees to pick up the fruits and vegetables as the customer directed them.
The plant seller had taken pre-orders. We didn't realize that, so took what was hadn't been claimed. Earl came home with six sunflower plants, along with a few daisy-type plants.

I had purchased gladiola bulbs at the grocery.
Grace took charge of the garden, planting whatever we brought home.
As I looked at the plants, I regretted that we hadn't gotten some alpaca fertilizer from a friend in town. The soil in our garden looks a bit like concrete when it dries. I feared for our plants.
We don't have any mulch, although apparently you can get sawdust or chunks of wood from the local sawmill.
We bought some more plants once the local garden store opened. It had a strict policy of "you touch it you buy it" since we were still in lockdown. But overall, we were pleased with our purchases.
Next we had to protect the young plants from the snails.

It wasn't long before the sunflowers in our garden began to take off. They grew and grew, climbing taller than the fence and even taller than Earl.
Sunflowers in a field are usually about my height. You can see that in the picture of me from two summers ago. 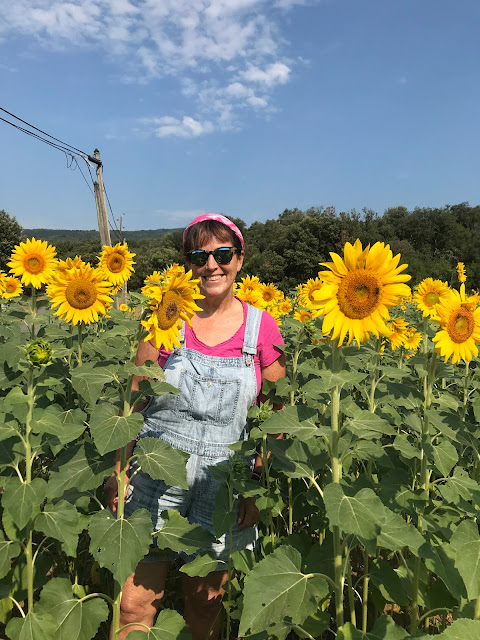 The gargantuan size of our sunflowers soon gave way to speculation.
Could there be a body buried somewhere in our garden, was our first suspicion. After all, we only bought the house last August. We had no idea about its history.

As some friends joined us for dinner in the garden, Ray shared a story about some delicious grapes that a friend had planted and harvested. Extraordinary sized, juicy, and plentiful, he described the grapes. Then, the owner followed the roots and saw that the grapevine had infiltrated the sewage pipe, causing the vines to grow so bounteously.
We figured that sunflowers don't have roots as strong as grapevines so they probably weren't in our sewage pipe.

My friend Derrick has another theory. He figures the sunflowers had to grow taller to catch the sun.

A tree across the street sometimes blocks the sunlight, so he speculates that the sunflowers reached for the sky to get the most sun.
Whatever the reason, it's lovely to have a garden full of sunflowers that tower over everyone. We'll sprinkle seeds and see if they come back next year in full force.
But we won't go digging around for Jimmy Hoffa, just in case.
at July 10, 2020

If love had a name, it would not have been more beautiful than love, love name itself is also lovely and the post you have written is more lovely than that you wrote a very good post.
escort service sector 77
call girls in gurgaon