We visited two years ago when our sons were in France. Now we had the opportunity to take Grace and Jack.
The show changes twice a year. When we went before, it was Pop Art along with Picasso and the Spanish Masters.  We preferred the Pop Art because it was so cheery and the music was upbeat.
This time, the exhibit was Gaudi and Dali.
The Gaudi exhibit started first. I loved it.

Gaudi, of course, is the architect for the famous basilica -- La Sagrada Familia --  in Barcelona 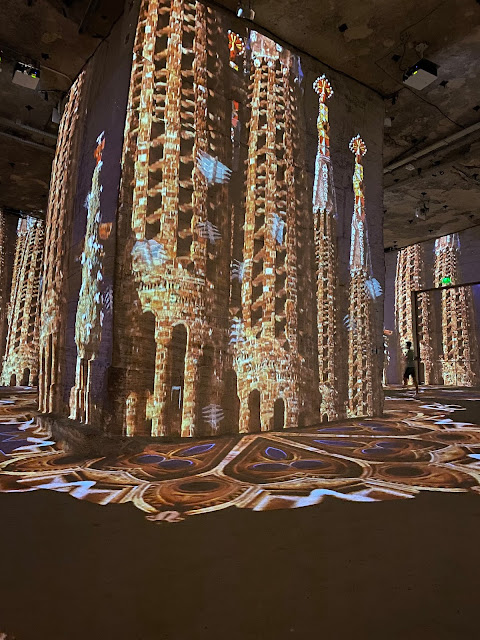 We could visit the basilica while hundreds of miles away in France.
Earl had to go back to the car because he had his prescription sunglasses on and wisely figured he might need his regular glasses in the dark. So he missed the beginning of the Gaudi exhibit. I insisted he stay for the next one so this is what it looked like as I filmed it. It begins with Gershwin's "Rhapsody in Blue." Heavenly.

As the music plays and the art comes to life, people can walk around, moving into different areas of the exhibit. Because of Coronavirus, everyone was required to wear masks and we had our temperatures taken before we walked in. They also limited the number of people inside the building so we were able to avoid others.
The second exhibit was Dali, and I'm intrigued by Dali, but have to admit that he is much stranger. 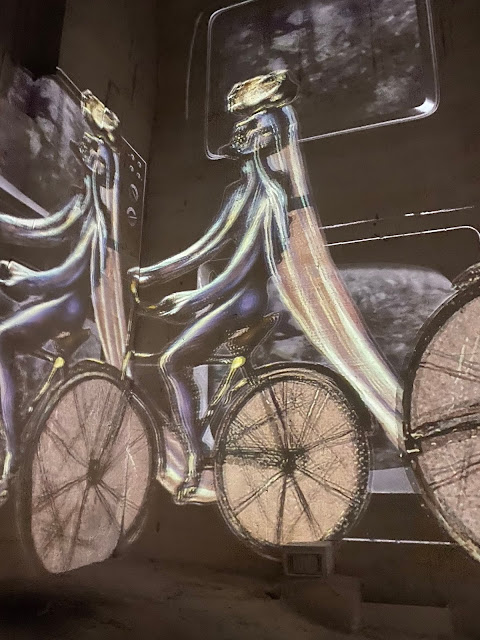 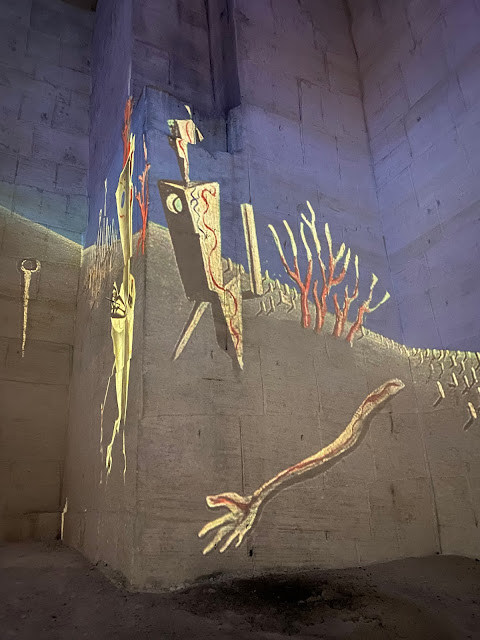 Most of the music they picked for the Dali exhibit could be traced to the 60s and 70s, like Pink Floyd's "Another Brick in the Wall," which wasn't bad.


The music and pictures are a bit more intense in this one.
After watching the exhibits, we wandered to the open air cafe for drinks. The air outside was clear, the sky an eye-watering blue.
How lucky were we to see the exhibit and then return to a fabulous day as we drove to Aix en Provence for the night?
at July 03, 2020

Only another perfect day in the south of France! What's so refreshing is that you truly appreciate every moment, and are able to accept the occasional difficulties as the price of admittance. Thank you for the snippets of the show. Looks very well done.

I love this kind of thing. We often have images as part of exhibitions on the outside of buildings.

I can't wait to be able to go back to art galleries and exhibitions.

So this is like the Atelier des Lumieres, right? It looks like a terrific show -- and then to go out into the cafe. Sheer perfection if you ask me!