Every Tuesday, Diane at Bibliophile by the Sea posts the first paragraph of her current read. Anyone can join in. Go to Diane's website for the image and share the first paragraph of the current book you are reading.
Maeve Binchy has taken me to Ireland so many times. Finding this posthumously published book thrilled me Chestnut Street. Here's the intro. 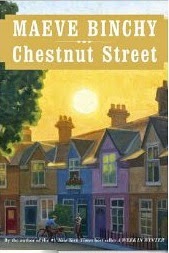 so I could take one more trip. I'm currently lost in her many working class stories in the book


It was all the harder because her mother had been so beautiful. If only Dolly's mother had been a round, bunlike woman, or a small wrinkled person, it might have been easier for Dolly, this business of growing up. But no, there were no consolations on that score. Mother was tall and willowy and had a smile that made other people smile too and a laugh that caused strangers to look up with pleasure. Mother always knew what to say and said it; Mother wore long lilac silk scarves so elegantly they seemed to flow with her when she walked. If dolly tried to wear a scarf, either it looked like a bandage or else she got mistaken for a football fan. If you were square and solid and without color or grace, it was sometimes easy to hate Mother.

This book is a series of short stories all connected to Chestnut Street. Sometimes the characters appear in each other's stories, but most the time they stand alone.
at August 12, 2014

Haven't read Maeve Binchy is years... sounds like a good one!

I have been wanting to read this book...love Maeve Binchy and will miss having her new books show up. Her talent was always how she brought the reader into the world she was showing. Thanks for sharing. Here's mine: “THE FURIES”

I love the author's writing. I would definitely keep reading.

Oh my gosh - I used to read so many of her books and haven't seen her stuff in ages! I do remember hearing awhile back that there was a posthumous book. I'm glad you're enjoying it and maybe I will pick it up at some point as well!

I used to read a lot of Maeve Binchy, and this intro definitely piqued my interest.

I like the sound of the first paragraph. I do love short stories so I'll have to give this a try.

I love the intro, and the author is one I read years ago, so I am interested in hearing more. enjoy

Thanks for participating this week.

Binchy never really disappoints. I didn't read this one, would keep reading.
Peggy @ The Pegster Reads