A lot of people give up things for Lent.
It used to be that people gave up a lot during Lent. They ate no meat during all of Lent -- now we narrow it down to not eating meat on Fridays during Lent. They ate pancakes on Fat Tuesday -- Mardi Gras -- to use up the sugar, eggs and milk that they were supposed to not indulge in during Lent.
A lot of times now, people give up chocolate or alcohol. People use it as a time to diet before summer rather than a time to do without so they can think of Jesus when they are tempted to indulge.
When my kids were younger, I started encouraging them to do something extra rather than to give up something. Maybe they would decide to be nicer to their siblings or to do a good deed every day. Tucker made this promise one year and whenever we went places, he would run ahead and hold the door open. Then he'd proclaim his good deed was finished for the day.
I'm not very good at giving things up. Whatever I give up, I obsess about. It's all I can think about.
So I was contemplating what I could do during Lent. I could give up TV, with exceptions, like March Madness basketball and The Amazing Race.
Finally, it hit me.
One of the most spiritual things I do is run. When I go out in the early morning, I look up for the moon and the stars. I'm so happy that I've started to hear the birds sing in the spring. 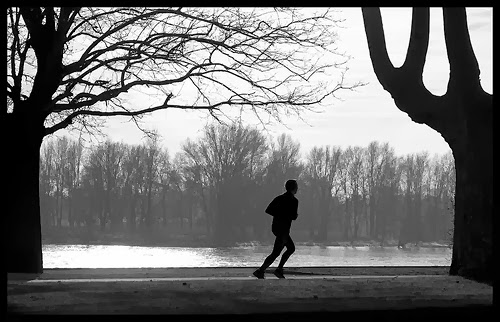 I decided I would try to run 40 days during Lent. Lent is 47 days long and I didn't run on Ash Wednesday, so that gives me only six days to skip runs.
So Wednesday morning, even as the rain fell and the thermometer dipped, I slogged through some puddles to finish my run number six.
I'm not sure that I'll make it to 40 runs, but I try to add spirituality to each outing. I spend some time contemplating what I'm grateful for -- good shoes, strong legs, smooth roads, safe neighborhoods. I try to stretch my thankfulness out to the world.
And I'm always grateful when I return home to put my run away, to check that off my list.
Maybe my run wouldn't seem spiritual to everyone, but for this year, it's as close as I'm going to get.
at March 13, 2014

Love your idea for Lent. It really is very personal act that cannot be judged by the outsider. I'm keeping a gratitude list for 40 days. Trying to skip the obvious, if there is such a thing.

I have to say it's kind of hilarious some of the things I'm grateful for on a daily basis or at least the ones I'm choosing to write down.

Oh.. yes.. and giving up my chocolates is going way better than I could have dreamed.

Yes, adding something uplifting rather than depriving oneself seems a much better spiritual discipline.

Such a super idea , to do a good deed a day. I Have given up bread , the easiest thing to give up .. and I now walk everyday .. I am grateful to be alive, since my depression a few years ago. Well done , xo

Just Me and Anne, These sound like great ideas -- gratitude journal, walking everyday. Hope we can keep it up throughout the year.
Sally, yes, uplifting does sound better than deprivation.