Every Tuesday, Diane at Bibliophile by the Sea posts the first paragraph of her current read. Anyone can join in. Go to Diane's website for the image and share the first paragraph of the current book you are reading.
This week I'm starting a new book for France Book Tours. It's The Collector of Dying Breaths by MJ 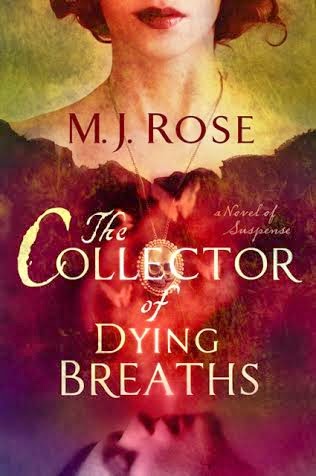 Rose. I've read another novel by her that I enjoyed. The attention to scent detail is amazing. This book is about the man who became the perfumer for Catherine de Medici and somehow becomes obsessed with bringing two people back to life. Hope it doesn't go too sci fi on me. The book comes out on April 8, but I received a preview copy from the publisher.
Here's the intro:


March 1, 1573, Barbizon, France.
Written for my son to read upon my death, from his father, René le Florentin, perfumer to Catherine de Medici, Queen Mother.
It is with irony now, forty years later, to think that if I had not been called a murderer on the most frightening night of my life, there might not be any perfume in Paris today. And that scent -- to which I gave my all and which gave me all the power and riches I could have hoped for -- is at the heart of why now it is I who call myself a murderer.

Also this week  is Teaser Tuesdays. Teaser Tuesdays is a weekly bookish meme, hosted by MizB of Should Be Reading. Anyone can play along! Open to a random page of your current read  and share a teaser sentence from somewhere on that page. BE CAREFUL NOT TO INCLUDE SPOILERS! Share the title & author, too, so that other TT participants can add the book to their TBR Lists if they like your teaser.
Here's a teaser from 45% on my Kindle:


"His time at court must come to an end," Henry said. "You are right. If the Protestants were to hear that my wife was engaged in black magic and spread rumors to that effect, it could be ruinous for her and for me."

It looks like this book has a modern-day character from one of her previous books, Seduction, which I reviewed in May 2013. Check back on April 9 for my review of The Collector of Dying Breaths.
at March 25, 2014

I'll be reading this one for a tour.

This books sounds promising. I would keep reading.

I enjoyed other books by M.J. Rose I have read, so would definitely be interested in this one. The premise sounds interesting!

I have yet to read this author, but this one looks like a good place to start.

I'm intrigued by the book's cover and title. After reading the opening and your Teaser, I want to know more!
My Teaser is from SEVEN LITTLE WORDS.

I'm on the fence with this one, I'm not a sci/fi fan. I'll await your review on this one.

I would keep reading. I've liked her other books.

That is one good teaser! And Intro! Happy reading!!

This book sounds really good, I like the first paragraph and the teaser; it certainly has me wanting to know more :-) Here is my TT http://cleopatralovesbooks.wordpress.com/2014/03/25/teaser-tuesday-march-25/

I had to think of the book Perfume when reading this, I would continue reading.

I'm anxious for more --great intro. I'll be curious to read your thoughts; thanks for joining us.

this sounds very interesting and congratulations on your book receiving such a wonderful review.