I've been at too many funerals in the past year for someone still in my 40s. But funerals often tend to be dry affairs that leave me melancholy.
Yesterday's was not. 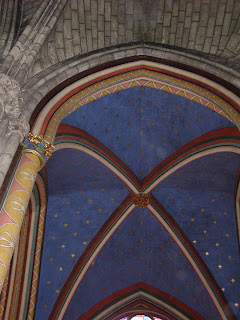 Tim, 59, died three weeks after a lung transplant. Six priests gathered to celebrate his life. His wife Therese, 53, was seated beside her brother Martin and his partner Carlos. As I watched the ceremony and sniffled through the songs, I felt like this was what the Catholic church was supposed to be -- a place of ritual and comfort, of rejoicing and worship.
I joined the Catholic Church 17 years ago -- voluntarily. I disagree with a number of policies, like birth control. And recently I've been really agitated when the Vatican sanctioned nuns for spending too much time with the poor and the sick, and not enough time fighting abortion and homosexuality.
Those agitated feelings faded during the funeral.
Father Vinnie stands about my height. He grew up an Irish Catholic in a family of about 10 in New York City. He's in his 70s and is the most gentle soul.
He led the funeral and he asked everyone in attendance to close our eyes and ask a loved one who had died to welcome Tim to heaven. The reality that Tim was in a different realm felt so real.
Then Father Vinnie pointed to a stained glass window made up of thousands of pieces of glass. Just like the window, he said, our lives were mosaics made up of many pieces. Where was Tim in the mosaic of our lives? What piece had he left, what part had he played?
Two sweet boys whose parents came from the Phillipines played their violins throughout the ceremony. They had been taught in religious education by Therese since they were three years old.
The priests took turns swinging the incense censor, the tangy smoke drifting throughout the church. They stepped up to bless the bread and the wine and I watched three of them hold up their hands calling down the holy spirit. I used to picture it like rays of God beaming out of their hands, kind of like the sticky goo coming from Spiderman's hands to form webs, and into the bread. 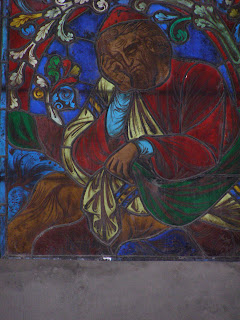 Two of the priests were older and a bit feeble. One of the younger priests hurried to help the priest with the walker stand during each section of the service. He also leaned over to show the old priest in the wheelchair where to look in the booklet he followed. His service to the older priests touched me.
I managed to stay mostly dry-eyed until after communion when Therese, now the widow of Tim, climbed to the lectern. She read a poem that each of us was put here to share a song or a story. Some of us were meant to share it with only a few, others with people throughout a village, still others with a whole country and others with the entire world. Then Therese challenged us to to decide what story or song we were sharing.
As soon as she stepped up, my eyes filled with tears. I couldn't believe her bravery. She'd just been through three weeks of hell, fighting with Tim for his life in a hospital, and now at his funeral, she gave back to us, the mourners who sat alongside her.

The ceremony ended with a song that didn't staunch the flow: "I have fixed my eyes on your hills, Jerusalem, my destiny. Though I cannot see the end for me, I cannot turn away."
at August 22, 2012

This sounds like a beautiful tribute to the decreased and his family and friends -- I love Catholic funeral masses -- not that I want to one anytime soon:(

So sorry about your loss.

The last funeral I went to was of an old friend who died suddenly of a brain aneurysm. That was really hard to go through. It just makes you appreciate every day you've been given.

Beautifully written Paulita. Thanks for sharing.

Well worth repeating, Beautifully written Paulita. Thank you so much for sharing.

Your description of Tim's widow was beautiful. Sometimes…often….I am amazed by people's bravery and strength.