It started with a trickle -- a friend of Grace's said, "You know that swimmer Ryan Lochte, he kind of looks like Spencer."
So, the next time he was on television, I took note. Maybe the nose, the cheekbones.
Then more and more people started commenting on it. A friend from Connecticut sent me a Facebook message. A friend of Tucker's mentioned it during a car ride.
I'll let you be the judge. I snapped a photo of Spencer last night and then borrowed some of Lochte from websites.
﻿
I can see it around the eyes and eyebrows too. But what I'm really afraid of is that some  people see a bit of physical resemblance and some attitude resemblance.
The reason I'm afraid is because Lochte really seems to be a douche. It's almost a cliche now, but it's the word that comes up most when people talk about his sparkly shoes that have "Ryan" on the bottom of one and "Lochte" on the bottom of the other or when he shows people his diamond-encrusted grill that he wasn't allowed to wear on the medal stand.
Spencer can give off that sense of bravado too. But Spencer is clever and funny. I haven't gotten that sense from Lochte.
There's a hilarious article about Lochte on the website Jezebel.com. The article is called 10 Reasons Why Ryan Lochte Is America's Sexiest Douchebag. And it's mostly written for women who comment on whether they'd still sleep with him even though he's a jerk, so don't read it if you might be offended!
Well, there is one other way that Spencer is like Lochte. He could be a blue jean model since he works tirelessly to keep his cut body. Here he is, caught in his natural state without a shirt, asleep on the couch. 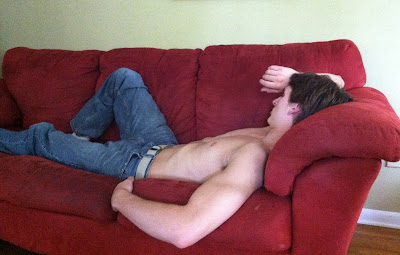 I think the entire reason he decided to go to college in Florida was so that he could go shirtless through the majority of the year.
I guess there could be worse things than being compared to an Olympic swimmer, even if he seems like a jerk a lot of the time.
at August 03, 2012

well I didn't know anything about all the drama around Lochte, but last night while I was watching I did think to myself man that kid looks like Spencer. :)

I can see where people are coming from, although I think Spencer looks slimmer in the face comparing the two pics...

Good looking chaps... the pair of them x

Suzie, I love that you used the word chaps-- so British. I should have taken a pic of Spence standing up since that's the angle most people see him from.

i think that tucker + spencer = lochte

They are both gorgeous.

Yikes! Your son is hot! I think a lot of guys have to go through the douchebag stage before they settle down into good human beings. No worry.

Do they bring laundry home when they go to school so far away ?