Toys From My Childhood

Does anyone else remember having this toy when you were a kid? You hold onto the ring at the top and move your hand up and down to hit the glass balls together. 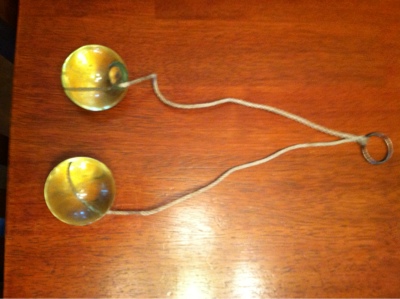 The balls make a satisfying clunk sound with each hit as you move your hand up and down to gain speed. Then when you get enough speed, you can have them hit at the top as well as the bottom. I used to be able to do it. Now, not so much.
I brought them home to show my kids. The cats were interested but not Tucker and Grace.
"They were recalled," I said.
"Obviously," Tucker said. "Who thought that smacking two glass balls together was a great idea?"
Well, I did. But apparently some people who were really good at it then had the balls shatter, thus the recall of the toy.
My mom and I found these as we were cleaning out box after box looking for the letters I wrote from France 25 years ago. We found only two letters. My dad suggested maybe I only wrote two letters, but I know that isn't true.
How is it possible that my mom saved every Christmas card since 1960 but doesn't have my letters? I probably took them some place and later disposed of them. I'll take the blame.
But at least I found these cool glass balls on strings.
at August 15, 2012

nope == not me and not my kids....i think you are somewhere in between us age wise???

Diane, I bet you guys missed some fun, dangerous toys then!

Yes, I remember a whole summer of fun with them. I know... I know... now you feel sorry for the types of summers I had and wonder what kind of parents would allow such.

Summers where we could not wait to get outside in the morning. And in the evenings, we didn't come in, until our parents yelled for us out the front door. Who's parents would call them in first. Who got to stay out the latest.

Another memory... summers meant summer school.. we chose classes we enjoyed and it didn't cost a dime. Summer school was kids who liked school not kids who didn't pass. Seems odd now.

Judi, Clackers. That's right. I've been practicing and it's annoying my husband.
Just Me, I love sharing your summer memories. I'm glad your clackers didn't explode, and neither did mine. I had one of those childhoods full of paying outdoors too. Those were the days.

I had clackers but they kept going missing!

Ooh, I remember those! I think we called them clickety clacks.