The news for weeks has talked about wildfires in Colorado. People flee their homes with few belongings and wait anxiously to see if the firefighters can stop the walls of flames advancing through the dry mountain brush. Houses are burned. Some people have died.
The news reminds me of a month I spent in Corsica more than 25 years ago. I was there babysitting two American girls with French grandparents and it seems like the time is right to tell the story since I'm participating in Paris in July sponsored byThyme for Tea and Bookbath . I've posted about my trip here when I talked about fashion, and here about lessons I learned from France, and here about a secret crush and an injury in Corsica.
While we were staying in Corsica, wildfires burned. 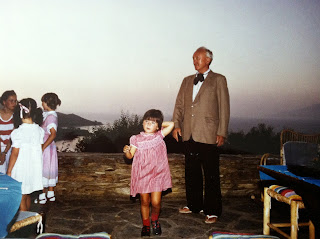 At first, I didn't know what was happening. I stretched out on my bed in the stone house to take a siesta while the little girls, Claire, 3, and Brigid, 4, napped. As I lay there, I heard the drone of an airplane. At home, I would have thought nothing of it. On the northwest coast of Corsica, the sound was as foreign as the language remained.
A knock drew my attention and Yves stuck his head in the door. "Come look at zhe planes," he beckoned.
I followed him to the stone balcony that faced the bowl of a bay in the Mediterannean. The bright yellow planes, the color of the winner's jersey on the Tour de France, took turns swooping into the Mediterranean Sea below us. Like pelicans going in for a catch, the planes skimmed the water, filling their red, hollow bellies with water. The planes then buzzed away to drop their loads of water on the fires in the mountains beyond.
We walked up the road to the top of the mountain, searching for smoke or a glimpse of the fire. We couldn't spot either, so we returned to our normal life, eating extravagant meals, lying on the beach,  playing tennis. 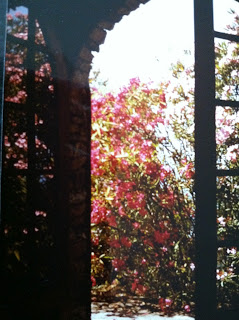 Corsica is a very dry island, with part of the land being a desert. In the sparsely-populated island, fires started and spread quickly without the benefits of fire hydrants or firefighters close by. Even if the island was lush with firefighters, it might take hours for fire trucks, on barely passable roads that twist through the mountains with sharp drop offs on one side and walls of rock on the other, to reach the spot where the fire burned .
A week later, on a Saturday night, we were driving to a nearby village. We looked up to see bright orange lights in some far away mountains. The next morning, the bells of the church rang loudly in the background while we stood watching smoke billow from a mountain across the water. Most of the day the mountain seemed to burn. We pulled out the binoculars to search for flames, but the dense smoke blocked the view of the flames.
On Monday morning, the faint acrid smell of smoke hung in the air. By afternoon, small pieces of ash fell into the gardens and on the house, as if we lived near a recently erupted volcano. 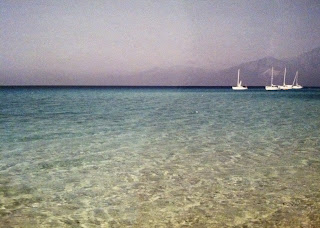 We ventured down to the beach, but the expanse along the water began to feel closed in as the smoke rose in huge clouds blocking out the sun. We heard the now familiar whir of the planes buzzing above the Mediterranean, like so many dragonflies searching for a clear place to swoop down to the water.
Children and adults rushed down to the edge of the water to watch the planes at work. The planes, tipped at a careful angle to gather water then take off again, slowly pulled away from the sea, full of their lifesaving load.
That afternoon, the windows in the house grew dark as the smoke billowed across the sky blocking out the light. I took the girls to the lower level and began to read them stories to distract them from the fire.
"Are we safe here?" I wanted to ask. The house was made of stone but had lots of wood, plus the roof could catch fire.
"Should we evacuate?" I wondered.
But I was still young enough to believe that wildfires weren't really dangerous and I trusted the judgment of the real adults in the house as I huddled in the lower level. I heard the swoosh of water from a hose as Monsieur Berger watered down the roof of the house to thwart any sparks. His children called to him to come inside, this elderly Frenchman who fought in World War II and was captured by the Germans. He refused to turn off the hose, to retreat into his Corsican vacation home and huddle with his family away from the flames.
The house didn't burn.
The next morning we took a trip across the island. We saw the blackened mountains and the skeletons of small shrubs brown and brittle. In places, stood geometric shapes of green, miraculously hopped over by the fire.  ﻿﻿﻿﻿On our drive back home, the smell of smoke alerted us to another fire. A thick cloud of smoke surrounded the car and the orange flames came into view, having already engulfed some small trees, leaving branches blackened. The popping and crackling of the burning plants reached our ears as we drove the car away from the flickering flames.
A lone fire truck wound slowly around the mountain, its blue light flashing solemnly, as we rounded a cliff and came face to face with a quarter moon whose white face reflected the flames turning it orange in the sky.

While that was something. Beautiful pics to go with your story.

I've been near fire when I lived in Tucson and it is a scary feeling. I've been to Corsica too, which I loved, and I agree-it is a really wild island with limited road service. I think there was once a very bad fire in Provence but all of the French fire fighters were in Corsica fighting a fire there so men from other European countries came to fight the fires and needed help from the locals for guidance as well as water from their swimming pools.

nice posting.. thanks for sharing.