On my way onto campus yesterday, a young mother and her 6-year-old daughter walked past me. The mother had a scarf tied around her hair and knotted in the front as if she covered curlers. She wore sweat pants over her taut body and a t-shirt. She walked quickly in her flipflops, and her little girl, in a one-piece shorts outfit and pony tails, hurried to catch up. The girl carried a bag on her shoulder that slipped down until she pulled it back up.
"Now you need to be quiet while you're sitting in the hall," the mother informed the daughter as they scurried past me. The girl silently nodded her head.
"That means no singing and no dancing," the woman said. "And no talking loud to Nonni on the telephone. Just draw and write quietly."
That made me think differently about this pair. The woman, a 20-something, inner city mother, returning to school. Her daughter home during the long summer days rather than at school. 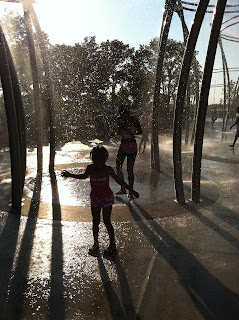 I wanted this little girl to be free to dance and sing. I pictured her, arms outflung, twirling through a grassy field, stopping only to make daisy chains. She only wanted to live, to not be stymied. In spite of  the hardships she was born into, she had managed to find joy in life -- joy that made her sing and dance at random moments, like a happy little girl does, like an improbable high school musical.
Some people might have judged this mother for taking her daughter along to college and parking her in the hallway. I might have judged her one not-so-long-ago day, but more and more, I see the lives of desperation many young mothers live, trying to claw their way out of poverty.
This mother needs to attend college to get ahead. She can't afford to hire a babysitter, and she isn't allowed to bring the girl into class. So she'll leave her in the hallway with a cell phone and a caution to be quiet, to act against her natural little girl instinct.
This morning, before I left campus, I stopped by an office. The chair of the English Department is temporarily acting as a dean until the school hires someone else.
"I have a big idea," I told her.
She stopped what she was doing and turned to listen to me.
"We need day care for school-aged children during the summer." I told her the story about the little girl who wanted to sing and dance. "Students should be able to leave kids there free of charge during their scheduled classes."
"I'll write it down," she said, searching through stacks of paper until she found what she called her "dean" notebook. "I think it's a liability problem though."
Maybe it won't happen. Maybe students will continue to park their children at computers and on couches and in hallways while they sit in the backs of classrooms and worry about their children entertaining themselves.
But maybe, our school, heavy with students returning to college, will set up a place that on a sunny summer day, children can sing and dance while their parents study and try to move their family up a step in the economic echelon.
at July 19, 2012

We have a similar situation with young inner city moms in our Human Services program. We so have daycare, but it's not free. I see mom and kids in the library a lot in the summer.

You have to give the woman credit for going to school even if it means dragging her kid to the hallway. (This is not meant to be judgmental at all -although in print it could come across that way).

I think it's a great idea. I hope they do it.

I think they should be free day care for these students. I DO understand what this young lady is going through , but feel sorry for the little girl who wants to dance etc etc .. Sounds like the USA is behind the times, (only and opinion) .. we have lots of summer schools here .. but doubt if free.