The whole family went to see The Three Musketeers yesterday since it was the final performance. Tucker brought along his girlfriend and Spencer barely fit into the seat, his knees jamming against the wooden seat in front of him. But neither of them were prepared for how uncomfortable the play was going to make them.
Here's Grace's first scene. As you can see, it was a bare-bones set.

From the very first scene, when D'Artagnan tells Grace's character that she's the most beautiful thing he's ever seen, the boys were squirming in their seats.
The next seen, D'Artagnan kisses her.
From then on, they tensed in dread whenever D'Artagnan was on the stage with Grace.
"Oh no," Spencer mumbled under his breath. I may have even captured it on some of the scenes I filmed.
At the intermission, I let them leave, even though they didn't get to see Grace's character kill Catherine de Winter. Yeah, the story totally changed in this one, but it added a lot of comic elements.
Here's a shot of Grace with some friends after the play was finished. 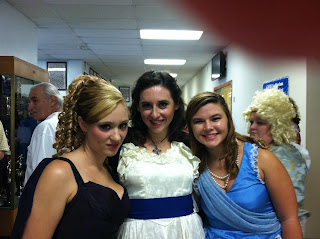 You should be really proud. She did a great job. Your sons are funny.

Maybe my sons should be on stage because their reaction was hilarious. Thanks, Linda for commenting.

Good Job Grace. I know it was only 27 seconds but she was so good. As always, thanks for sharing