Today is our Independence Day, but, of course, I'm celebrating Paris in July sponsored byThyme for Tea and Bookbath, so I'll need to compromise. 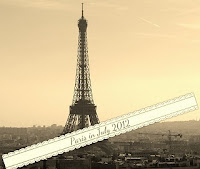 I've only been in France one time over the 4th of July and since it was my long trip to France, I was disoriented and babysitting two little girls, so I probably did not even notice that I missed 4th of July.
I can only think of two national holidays that are celebrated here and not in France. The first would be 4th of July and the second would be Thanksgiving. I haven't been in France on Thanksgiving, but someday maybe.
In order to pay tribute to our holiday, I ran 4 miles before it got too hot, and I'm going to a cookout at my brother in law's house.
I can include a photo of myself, looking relatively patriotic in a blue and white shirt though. The picture was taken on the train from the Charles de Gaulle airport to Paris on our most recent trip there in 2010.
So I can claim a tentative link to Paris in July and 4th of July.
Here it is. 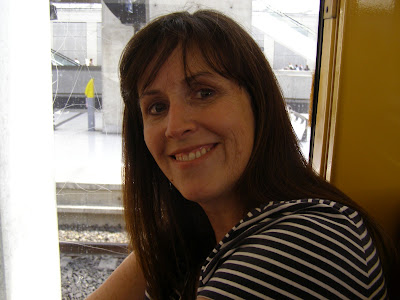 And since I've included the blue and white for 4th of July, I'd better include some red too.
So, here you go, once again, from Paris. 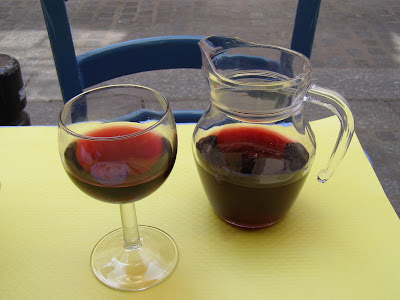 Now I've given  you red, white and blue for Independence Day and I've tied it all into Paris.
Hope you have a happy day, whether you celebrate or not.
at July 04, 2012

I'm not doing anything special today but I do on Thanksgiving.

We always get up early on the 4th to watch the Peachtree Road Race on TV. It started years ago with 110 runners and today there were 60,000 running in Atlanta! I remember all the fireworks I watched growing up in France so I like to watch fireworks here too. What I miss here is the dancing. In France for the 14 of July (which American call Bastille Day but French people don’t by the way) people have dances in public squares and it’s a lot of fun. This morning I kept moving the channels between the Road Race and le Tour which ended in Rouen today. My husband and I watch the Tour de France on TV every day; it’s like doing a little trip to France.

I like watching the tour too, and not just for the wrecks. I love the scenery and I wish I knew how to say Rouen in French

you look great! Hope it was fantastique!

What French wine did you have? It looks delicious! I had my first Medoc in France and it's been a favorite ever since!