Twenty-five years ago today, I was in France. That was my longest trip to France where I spent three months shepherding two young American girls as their grandparents spent a month each in Corsica, the French countryside near Bourges and then their apartment in Paris.
Aaaah!
Although the trip was long and I began to miss home, the trip definitely changed my life. One of the things I learned was that education was a priority for the French, and although I had my bachelor's degree, I came home determined to further my education. I entered graduate school the following year and received my master's degree. Maybe my need for more education came because of the cute doctor, Francois, who trying to explain sailing to me asked in a puzzled voice, "Didn't you ever take physeeks?" Of course, he meant physics, and I still haven't taken it.
Maybe the love for education came from lying on the beach in Corsica while reading F. Scott Fitzgerald. Aaah! There is no better place to read Fitzgerald than on a French beach. Maybe the need for education seeped in during the heated political discussions with the German cousins. Maybe it came from being surrounded by a strange language, although I had minored in French in college, that finally began to be understandable. I loved being able to decipher the words so that slowly the family had to stop talking about me when I was in the room.
And that master's degree has really paid off for me, finally. I'm not just a stay-at-home mom writing occasional articles for the newspaper. I'm teaching at two different colleges and making enough money to send my daughter to college.
But, in spite of all these ways that visit to France changed my life, that isn't why I started thinking about my trip 25 years ago.
It was the simple peach that brought it back to me. 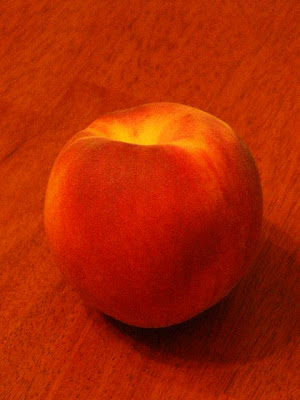 When I was a kid, I was fairly persnickety. I remember sitting at the dining room table all afternoon because I refused to eat the apricots my mom served. She made me stay at the table until I ate them. She finally gave up.
So when I went to France, at the beginning I was turning down offers of cantaloupe and watermelon. The French would look at me in astonishment. How could someone not like these fruits?
When they offered me a nectarine, I took it curiously. I had never eaten a nectarine. They asked me what the word was in English and peach was as close as I could get, but that wasn't right.
That nectarine in Corsica was heavenly. The juice would have dripped down my arm if I'd eaten it like an American, which I didn't, since I was in France. We used a knife and fork to slice up the nectarine and delicately eat each juicy morsel. It was the best fruit I had ever tasted.
This year, the peaches I've been buying from Trader Joe's are rivaling those nectarines. The scent rises from the box tempting me as I pass. And I do pick up a peach with its red and gold soft skin and bite into it, allowing the juice to drip down my arm. And it makes me think of Corsica and France and cute French doctors who say "physeeks." 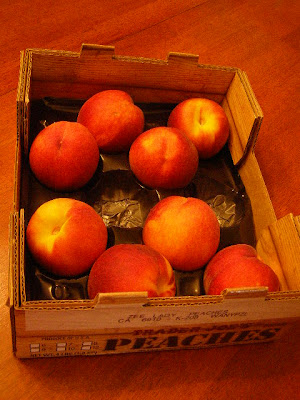 I could smell them. A fruit that reminds me of my trip to Sicily is the Watermelon because that's what was served daily after lunch. Oh and I mustn't forget the ever popular Prickly Pear!

I love Melon, of any type.. and I love Necterines , more than peaches.

Oh yes the fruit in Sicily is great.

I was only in Montreal for one week , back in June, not long enough, but a great little trip to visit my relatives.. Oh French or French Canadian .... so different, cannot say which I prefer.. and the countries are so different.

The peaches are in season here right now, melons too. They are so good.