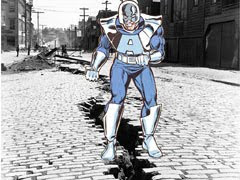 I was listening to This American Life which aired a show about superheroes. One guy makes parties more interesting by asking people which super power they would choose -- flight or invisibility?
Here's the link: http://www.thisamericanlife.org/
I stopped grading papers for a minute and thought about it.
Flight, I decided. It was practical. I could actually use flight to get places.
I couldn't think of a single reason that I would want invisibility. I'm not the sneaky type. I'm very forthright and am always surprised when other people aren't. People on the radio program talked about being invisible so they could steal sweaters from Barney's and get on airplanes to fly places. I'd have the power of flight. Why would I need to sneak on an airplane? And I wouldn't become a thief just because I could get away with it. That's not what keeps me from stealing in the first place.
One person on the program said everyone truly wants Invisibility but some people pretend to want Flight because it seems more admirable.
I thought of Harry Potter, who, with his invisibility cloak, could have been very nefarious. Instead, when he was on the run and hiding under his invisibility cloak, he would leave money behind when he took food.
Maybe I don't like people enough to want to be invisible. I can't imagine choosing to spend more time around people so I could watch them in secret. That's what reality shows are for, right?
So, I choose flight by default. I could fly to visit Mom and Dad in Florida. I could fly across the ocean to visit France. I wonder how big a suitcase I could carry with my superpowers?
What about you? Which would you choose -- Flight or Invisibility
at August 14, 2010

I'd choose flight too. I think when I was going through my divorce I would have chosen invisibility so I could see just exactly what my ex was doing. He had so many secrets, a secret life, and I never did get answers to my many questions. Now I don't care.

Hi there, I'm finally back in the blogging world.

I agree with all your points and I also would choose flight. I can't think of anything that I would need invisibility for, plus if I did have that what would I do with the information that I discovered?

i would choose invisibility because I could make myself invisible to get on a plane to fly any where. I could also be invisible when getting on cruise ships, trains, buses too!

Flight! It would be so much fun!

Invisible with out a doubt. For me it represents peace from others; I think I've been striving to be invisible most of my life.