In honor of the Tour de France (remember emphasis on France for July), I took a bike ride this morning.
I was sick yesterday, sore throat and aches, so when I tried to run this morning, I didn't get far. Instead, I walked to get coffee. I tried some P90x exercise. I made some French toast for Tucker before he went to work, still my mood was zooming south. I decided to try to pull up from my plunging mood with a bike ride.
I have to go about a mile on the road until I get to the bike path. Once on the path, I tried to live in the moment. I felt the cool wind on my arms and cheeks. I heard the sound of traffic in the bridges that passed over the path.
The sky was a beautiful blue, fighting the haze that will come as the temperatures rise today.

As I cycled down the trail, I smelled the earth and the trees damp still from last night's rain.
The sun was slowly rising from the east making shadows of trees on the black bike path. 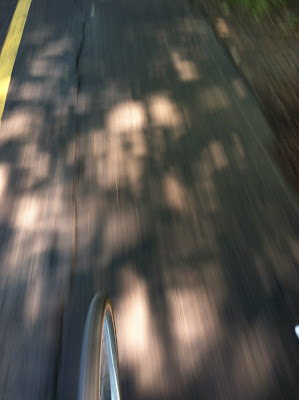 I saw traffic standing still as the city closed streets in preparation for the July 4th celebration. I saw families camping out in their tents to save their spot for firework viewing. The temptature is supposed to be in the 90s the next week. I can't imagine the celebration is that appealing, to camp out for two days before the fireworks.
The families who were not camping had cordonned off spots in the grass with yellow and orange caution tape. 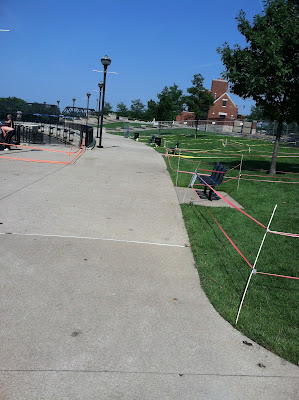 I swerved through a family of geese and they hissed at me.
I saw city worker after city worker preparing for the celebration.
Then I biked south of the city past the fountains 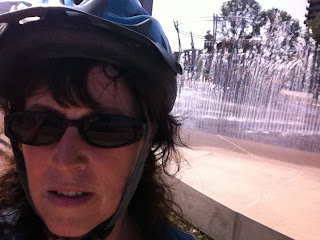 to the Audubon center where the sounds of birds mingled with the far off drone of traffic. 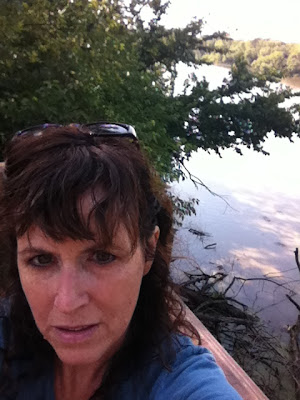 Hoping to leave my bad mood behind, I biked home again.
No sprints. No mountains. No winners or losers.
Just me and my bike on a lovely, breezy day.
at July 02, 2012

Glad the bike ride lifted you up:) pretty photos.

I think it's great that you did a ride in honour of the Tour! Great post.

There's nothing quite like a bike ride to lift one's spirits. It's been far too hot for me to get out on the trails, but I'm getting antsy and may head out tonight.