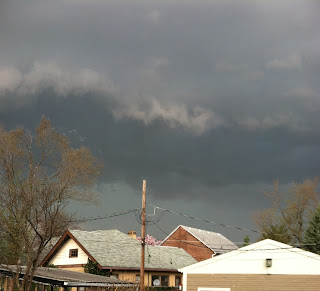 This afternoon, the sky grew dark in the middle of the afternoon. I rushed to finish preparing a spaghetti dinner before Earl left for work, so he could dish it into a plastic container to take along.
I flipped on the light over the stove, then moved to turn on another light over the counter as the gray clouds rumbled, blocking the sun.
Then after he had left, as Spencer and I sat on either side of the wide wooden table, the rain came down with a vengeance and the temperature plummeted. The rain streamed from the downspouts and blew sideways in sheets.
Flashes lit up the sky and raindrops pattered against the metal awnings over the windows.
I threw up a few windows to smell the aroma of the earth as it soaked in the needed rain. The scent of the air thick with moisture. 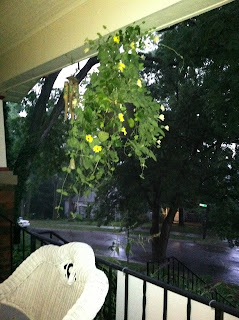 This afternoon storm reminded me of so many others.
When Earl and I lived in St. Petersburg, we would often listen to the rainstorms from his brass bed, the sound on the roof the most romantic of symphonies.
When we lived in central Florida, I remember watching lonely storms from the back, screened-in porch and the temptation to run into the fierce rains before they dried up and moved along.
After the kids were born, I was more likely to move to the basement as storms rolled in and the overly cautious tornado sirens began their wailing.
Now though, with a front porch that looks out over the surrounding houses, I'm drawn there to watch the flashes and listen to the rumblings of the great bowling alley in the sky.

I love thunderstorms. All that lightning and thunder-so dramatic. Being from Texas, there was also always the threat of tornados to add to it all. I remember seeing really black clouds from the 10th story of a building years ago and rushed home to beat the rain-that storm led to a tornado that wiped out an entire town.

Linda, Wow. That is a scary story. One advantage to living in a flat place, like Ohio or Texas, is the fact that you can see the storms coming.

Yes love them. But not at baseball tournaments!