Wednesday afternoon, the sun was shining and the thermometer climbed into the 60s. I was working when Earl texted me and asked if he could make me something for lunch.
"Let's walk downtown and eat," I texted him back.
So when I got home, we walked to the strip of downtown and debated where we should eat. One restaurant was only open for dinner on weekdays. Another didn't have any outside seating. We ended up at our favorite Italian restaurant which had one lonely table outside.
We'll take it!. 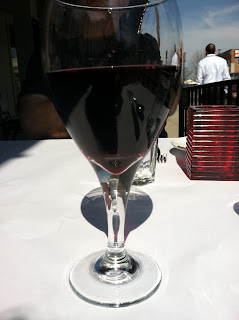 As we settled into the sunshine, ignoring the whipping wind, the waiter set the usual menus in front of us and then a different menu. We had happened upon "Dine Originals" week in Columbus. This is a week when restaurants around the city offer special meals at special prices.
We could get a salad, a main course and dessert for $10 -- like a prix fixe at a restaurant in Paris. And it was cheap enough that we didn't feel guilty ordering the $7 glasses of wine to go with it.
We started with a spinach salad with dried figs and goat cheese. Then we ate wild mushroom ravioli with spinach and dried tomatoes. I finished the meal with pots de creme, which is similar to a chocolate mousse. Earl went for the cannoli.
I didn't need to eat again the rest of the day.
The outing was a reminder to me to enjoy the current life I'm living, rather than pining for the life we have planned for the future.
Yes, someday we hope to settle in a small village in France where slow lunches and long walks are the norm. But until then, we can find the same thing in our own little Ohio village.
at March 08, 2012

I know fee people who can find celebrations in the everyday like you can. Love you

That meal sounds really good. It is nice to enjoy the moment.