Last night was Spencer's final high school basketball game. Unlike a lot of sports that go on to districts or states, the basketball season ends with a loss for almost every team as they get knocked out of the tournament.
Here's a picture of Spencer in the grips of his coach. I'm not sure if it is right after he fouled out with a minute left or as he was going back in to get his last foul. 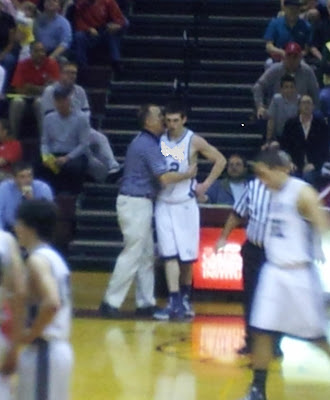 He's had a love-hate relationship with this coach who left Spencer in for almost the whole game last night to see him score 16 points and pull in 6 rebounds. Nevertheless, the team lost by 6 and is finished for the season.
People stopped me on the way out, exclaiming over Spencer's amazing game.
"He left everything on the court," they said.
"It was obvious he wasn't ready to be finished with the season," another one said.
"Awesome game."
And I felt sad at the end of an era.
At the end of Grace's high school swimming, she still had YMCA swimming to finish that winter and again in the summer before she went to swim in college.
Spencer says he will not play basketball in college. He's finished with coaches and refs who call more fouls on the big guys.
"Basketball will always be part of my life," he said.
And I know he's right because I've watched my brothers compete against each other on the basketball court into their 40s and my dad played basketball into his 70s before a should injury forced him to the sidelines.
So basketball will always be there for Spencer and he has some pretty good high school games that he can point to when he reminisces.
at March 01, 2012

I think I'll cry when Marina stops playing baseball! I feel sad for
Spencer that the season is over! He gave his best which is all we ever want from our kids.

I'm getting a little choked up reading about his last game, that he won't play in college and that it will always be part of his life.

I love that, although, it was the last game, he knows that basketball will always be in his life, like his uncles & grandfather. Such a sweet story!

What a great boy. I love Spencer. It is a hard to see an end to an era.