The wind came sweeping down the plain in our little town this weekend as the high school put on the musical Oklahoma. When Grace was in high school, I worked on 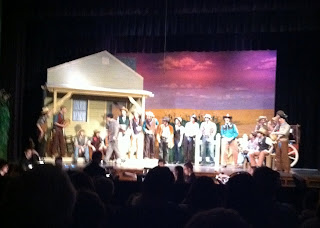 costumes for weeks before the musical. This year, teaching 7 college classes, I avoided volunteering. But Earl went to work on the set and kept telling me how intricate it was. I finally got a chance to see for myself on Thursday night. One of the other mothers texted to ask if I'd help sell flowers. So I passed out carnations for a dollar and got to sneak in to watch the production.
Tucker tried out for the ensemble and in addition to being a cowboy, got to be a dancer, which meant throwing himself on the floor, learning the two-step, and flinging girls around the stage. As a matter of fact, at the end of the production, they gave him the "brute strength" award because much of the time he was lifting girls into the air. Not a bad way for a 16-year-old to spend nine weeks of rehearsal. 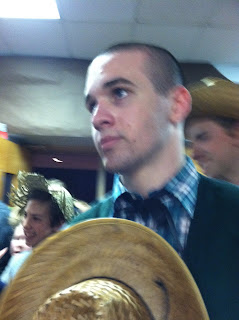 He says it was a lot of work and he doesn't know if he'll do it again. He had to juggle swim team with musical, and going to States to compete, and he has already started track practice. But I think he had fun, and I could tell he was having fun on stage. Who knows, next year, maybe he'll get the nerve to accept a speaking part.
at March 12, 2012

The set looks great. I remember being in a play with fondness. I never got a speaking part though.

I. too, loved being in plays and musicals, but did not end up with a speaking part. The joy was in being a part of the whole performance.
Later, as a teacher, I initiated and produced various dramas, so this brings back fond memories for me.

That looks great! I'd much prefer set construction & painting over costume creation any day!